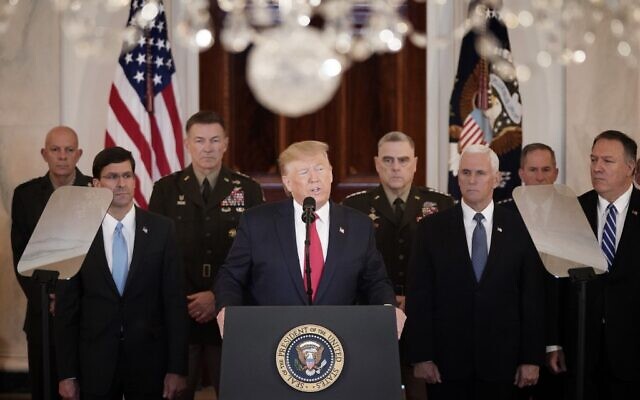 WASHINGTON (AP) — US President Donald Trump said Wednesday his administration will immediately impose new economic sanctions on Iran in response to Iranian missile strikes on US bases in Iraq.

“As we continue to evaluate options in response to Iranian aggression, the United States will immediately impose additional punishing economic sanctions on the Iranian regime,” Trump said in a nationally televised address from the White House. “These powerful sanctions will remain until Iran changes its behavior.”

It was not immediately clear what those sanctions might be, and Trump’s vow left many wondering what is left for the US to sanction in Iran.

The administration has already reinstated all the US sanctions that were eased under the 2015 nuclear deal. But it still has room to boost the penalties and step up its “maximum pressure campaign” on Iran. Some argue that he could call for the reimposition, or “snapback,” of all international sanctions at the United Nations.

The primary agencies involved in implementing sanctions — the departments of Commerce, State and Treasury — do not disclose any actions in advance to prevent targets from taking steps to evade them.

Yet, the administration retains broad authority to expand existing US sanctions on Iran’s financial, energy, shipping and military sectors and it can also target individual Iranian officials and their families with penalties, including asset freezes and travel bans.

It can also raise the pressure by threatening foreign individuals and companies with US civil and criminal penalties if they do business with designated Iranians, under so-called “secondary sanctions” authority.

Richard Goldberg, an advocate for tough measures against Iran who until last week worked on Iranian issues at the National Security Council, said assumptions that the administration had reached the limits of what it could sanction were incorrect and that much more pressure could be brought to bear.

“Many wrongly believe the US has already reached ‘maximum pressure’ on Iran, that we have fired all the arrows in our non-military quiver,” he wrote on Twitter. “That is not correct. We are at an 8.5/10 on the pressure scale. Many non-kinetic options available to ratchet up pressure toward 10/10.”

Goldberg said one option would be for the US to demand the snapback of all United Nations sanctions that were eased under the terms of the nuclear deal. The UN Security Council resolution that enshrined the deal allows participants to make such a call if Iran is found to be violating the agreement.

Some US officials and lawmakers, including Senator Ted Cruz, a Texas Republican, have argued that the US remains a “participant” in terms of that resolution despite its withdrawal from the nuclear deal. That argument, however, would likely be rejected by other council members, notably Russia and China.