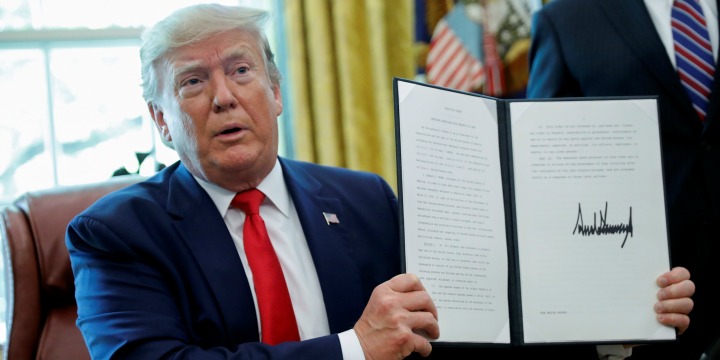 US President Donald Trump signed the Never Again Education Act, which seeks to expand Holocaust education in the United States, into law on Friday.

The House of Representatives passed the legislation in January, while the Senate did so on May 13.

The new law expands the US Holocaust Memorial Museum (USHMM)’s education programming to teachers nationwide, requiring the museum to develop and disseminate resources to improve awareness and understanding of the Holocaust and its lessons.

A total of $2 million will be allocated annually this year and for each of the next four years to the Holocaust Education Assistance Program Fund, administered by the USHMM’s governing body, the US Holocaust Memorial Council. Private donations for the fund would be permitted.

The measure will create an online Holocaust-education repository of resources for educators to teach both middle-school and high school students about the genocide that killed 11 million people, six million of whom were Jews.

“The bipartisan Never Again Education Act is finally law,” Rep. Carolyn Maloney (D-NY), who introduced the House of Representatives bill with Rep. Elise Stefanik (R-NY), told JNS. “I’m proud our country has come together to make clear that antisemitism cannot and should not be tolerated.”