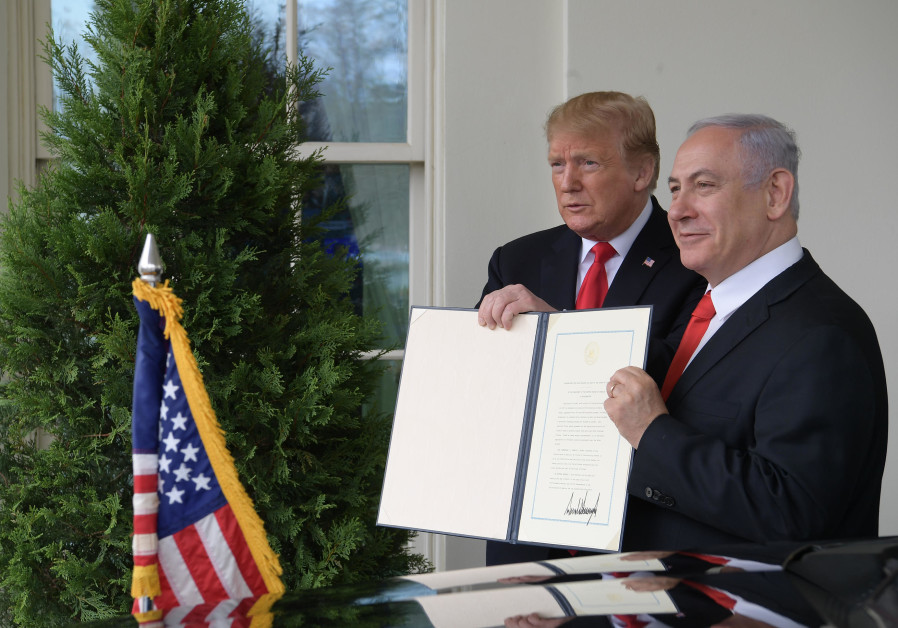 WASHINGTON – With Prime Minister Benjamin Netanyahu standing at his side, US President Donald Trump on Monday signed an official presidential proclamation recognizing Israeli sovereignty over the Golan Heights, formally giving Netanyahu a pre-election gift just two weeks before the elections.

“Today I am taking historic action to promote Israel’s ability to defend itself, and really to have very powerful and very strong national security, which they are entitled to have,” Trump said in the White House Diplomatic Reception Room, soon after Netanyahu arrived at the White House for a meeting.

The meeting took place in the shadow of Hamas’s missile attack on central Israel, and Trump said that attack showed “the significant security challenges Israel faces every single day.”

Netanyahu heard about the missile attack shortly before midnight Sunday, and held security consultations with the chief of staff and other top security officials, during which he approved the targets that the IDF acted against in response to the attacks, asking the military establishment to prepare a bank of significant targets.

Netanyahu also decided to cut short his trip to the United States and return to Israel after his meeting with Trump. Following that meeting, he held further consultations from Washington with the defense establishment in Israel.