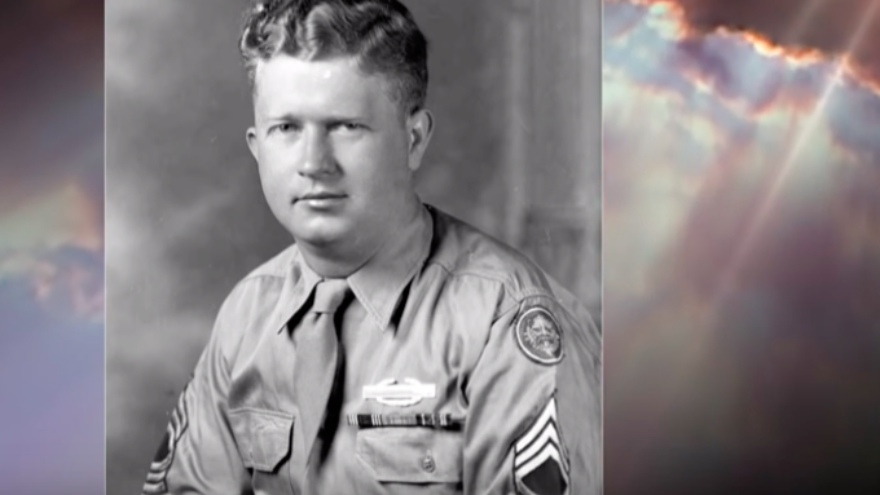 “Here with us today is Lauren Mathews, the granddaughter of a Battle of the Bulge veteran who has since passed away,” said Trump. “His name was Master Sergeant Roddie Edmonds. Like so many of our veterans, Roddie never talked about the war. Lauren never knew her grandfather’s story until she embarked upon a school project about 10 years ago.”

Roddie was in the 422nd regiment, which was overwhelmed when the Nazis launched their surprise assault. He and his men fought for three treacherous days before being taken as prisoners of war. After they arrived at a prison camp, the German commander sent an order over the loudspeaker. The Jewish-American soldiers were all told to step out of line during the roll call the next day. Knowing the terrible fate that would come to his Jewish comrades, Roddie immediately said, ‘We’re not doing that.’ He sent orders to have every American step out of line with their Jewish brothers-in-arms.

Edmonds was captured during the Battle of the Bulge by the German army on Dec. 19, 1944. As the highest-ranking officer in the Stalag IXA, a prisoner of war camp, he was responsible for the camp’s 1,292 American POWs.

He survived 100 days of captivity and returned home after the war, but never told his family of his actions. Edmonds passed away in 1985, and only long afterwards was first recognized for his heroic actions.

There have been efforts for Edmonds to posthumously receive the Medal of Honor, the highest honor for a U.S. military service member.

The Jewish Foundation for the Righteous, a Jewish elderly welfare group, expressed appreciation for Trump’s recognition of Edmonds. The organization posthumously recognized him in 2016 with its Yehi Or Award.

The JFR also produced the award-winning documentary titled “Footsteps of My Father,” told through the lens of Edmond’s son, Pastor Chris Edmonds, and several American Jewish prisoners of war, including Lester Tanner, who was present at Monday’s event.

In 2016, the pastor talked about his father’s story at the annual AIPAC Policy Conference.