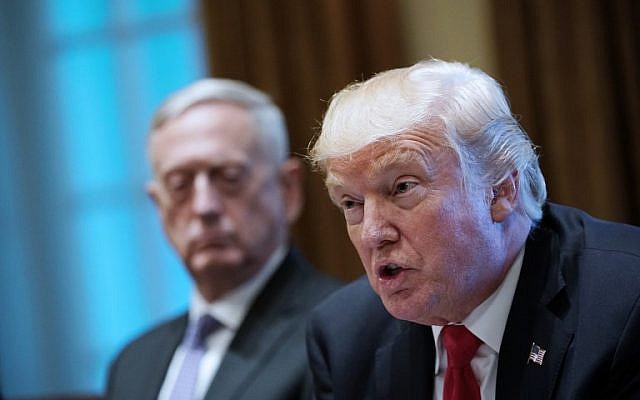 US President Donald Trump on Thursday insisted Iran has not acted in keeping with a deal to curb its nuclear program, days before he must decide on the future of the accord.

“You will be hearing about Iran very shortly,” said Trump as he met military leaders to discuss the issue.

“They have not lived up to the spirit of the agreement,” said Trump, who appeared poised to withhold certification of Iran’s compliance, leaving Congress to weigh sanctions that could scupper the deal.

“The Iranian regime supports terrorism and exports violence and chaos across the Middle East,” Trump said.

“That is why we must put an end to Iran’s continued aggression and nuclear ambitions,” he said. “You will be hearing about Iran very shortly.”

Trump was set to announce that the landmark Iranian nuclear deal signed in 2015 does not serve US national interests and that he will decertify but not withdraw from the accord.

The Washington Post, citing persons briefed on the White House’s Iran strategy, reported Thursday that Trump is set to make this announcement next week, ahead of an October 15 deadline to report to Congress on whether Iran is complying with the agreement.

Ahead of the deadline, several officials familiar with White House deliberations told AFP Trump has made it clear he does not want to certify Iran’s compliance with the accord, flying in the face of advice from some of his closest advisers.

But the Post reported that Trump’s senior national security advisers agreed over the past several weeks to recommend that Trump decertify the agreement at the October 15 deadline.

The move would prompt a 60-day congressional review period to consider the next steps for the United States, which, along with five other states, signed onto the accord.

The White House, according to the report, has been discussing ways to “strengthen” the Iranian nuclear agreement, congressional aides and others said, adopting a “fix it or nix it” approach advocated by Israeli Prime Minister Benjamin Netanyahu .

Israel’s Channel 2 reported earlier Thursday that Trump was also set to announce a series of measures to punish Iran for its regional behaviour.