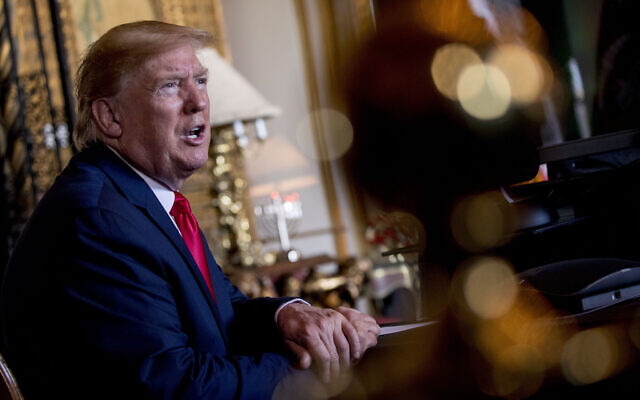 After almost a day of silence, US President Donald Trump commented Sunday on the stabbing spree at a rabbi’s home in Monsey, New York, the night before that left five injured, calling it “horrific” and wishing the victims a full recovery.

“The anti-Semitic attack in Monsey, New York, on the 7th night of Hanukkah last night is horrific,” Trump tweeted.

“We must all come together to fight, confront, and eradicate the evil scourge of anti-Semitism,” Trump said. “Melania and I wish the victims a quick and full recovery.”

“Antisemitism and hate have no place anywhere in our world and we must continue to stand together against them,” Trudeau tweeted. “Last night’s attack on Jews celebrating Hanukkah in New York is a sad reminder of the rising numbers of such heinous acts. We must all come together to end them.”

Of those injured at least two were seriously hurt in the Saturday night attack and a suspect, Grafton Thomas, 37, was later arrested after fleeing the scene.

Thomas allegedly entered the home of Rabbi Chaim Leibish Rottenberg, who was hosting a Hanukkah gathering, and began wildly stabbing those inside. He is facing charges of five counts of attempted murder.

“How terrible that Hanukkah started with a message of hope and on this last day we face antisemitic graffiti in London and horrific stabbings at a party in New York,” wrote Corbyn, who last week tweeted a Hanukkah message that highlighted the idea of hope as expressed by the eight-day festival. “We stand with all our communities facing hate.

“We send love and solidarity to Jewish communities around the world,” he wrote.

Corbyn earlier this month lost a general election to incumbent UK Prime Minister Boris Johnson and his conservative party. Corbyn’s campaign was dogged with accusations that as Labour leader he has not done enough to root out anti-Semitism in the party.

The Bahraini Foreign Ministry put out a statement condemning the Monsey stabbing — but without mentioning that Jews were the target and victims, or that it happened at a Hanukkah event.

The ministry said it “condemns the terrorist knife attack that took place near New York City in the United States of America, which resulted in the injury of a number of people, wishing them a speedy recovery.”

Bahrain stressed “the solidarity of the Kingdom with the United States of America in the face against terrorism, reiterating the unwavering position of the Kingdom of Bahrain in rejecting violence, extremism and terrorism regardless of its forms and motives.”

Trudeau’s remarks, apparently the first response to the stabbing by a world leader, came as Trump began to draw criticism for continuing to remain mum about the incident.

Trump was active on Twitter during the morning, to share a post that gave the alleged name of the anonymous whistleblower whose complaint ultimately led to Trump’s impeachment by the House, and to attack House Speaker Nanacy Pelosi, who, he wrote, “should spend more time in her decaying city and less time on the Impeachment Hoax!”

Yair Rosenbeg, a senior writer at Tablet Magazine, shared Trump’s Pelosi tweet and commented: “Five Jews are in the hospital after being chopped up at a menorah lighting, following a spree of anti-Semitic assaults in NY all Hanukkah. Fortunately, President Tweet is doing presidential things, reassuring the Jewish community and confronting the issue. Haha, who am I kidding.”

Trump’s daughter and senior adviser Ivanka Trump, who is Jewish, commented earlier on the stabbing assault, tweeting, “The vicious attack of a rabbi in Monsey, NY last night was an act of pure evil.

“As we pray for the victims, may the candles of Chanukah burn bright through this darkness,” she wrote.

Speaking at the scene of the attack on Sunday morning, New York Governor Andrew Cuomo called the rampage “an act of domestic terrorism,” adding that the state stood “in solidarity with all members of the Jewish community.”

President Reuven Rivlin said Sunday on Twitter that he was “shocked and devastated by the terrible terror attack in New York.”

“Israel strongly condemns the latest expressions of anti-Semitism and the cruel attack in the middle of Hanukkah at the home of the rabbi in Monsey,” he said at the opening of the weekly cabinet meeting on Sunday.