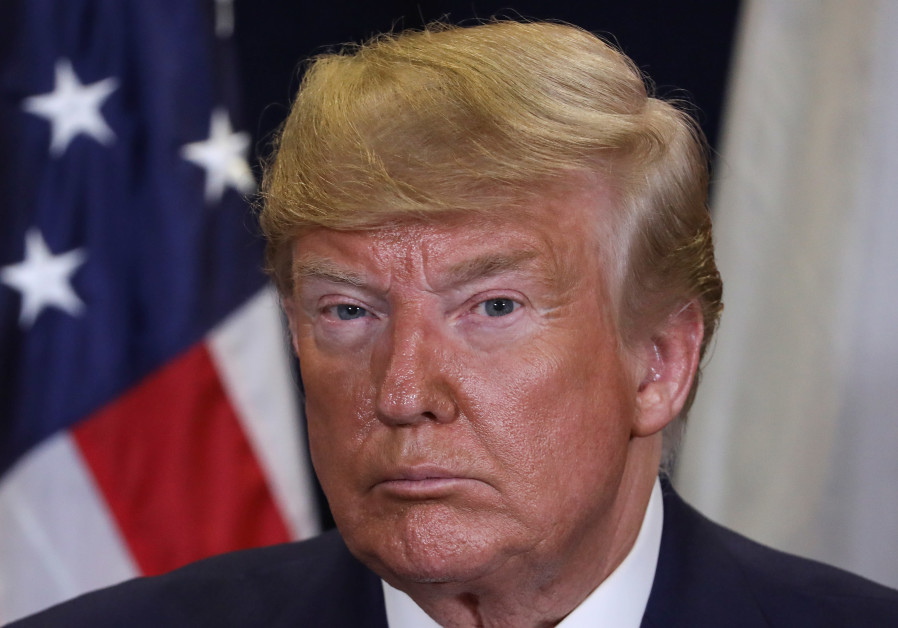 Iran’s antisemitic hatred of Israel is unacceptable, US President Donald Trump told the UN as he warned Tehran that sanctions against it would not be lifted as long as it’s “bloodlust” and nuclear drive continued.

“For 40 years, the world has listened to Iran’s rulers as they lash out at everyone else for the problems they alone have created,” Trump said as he addressed the opening segment of the 74th General Assembly.

In describing the dangers of Iran, Trump said that its leaders “conduct ritual chants of ‘Death to America’ and traffic in monstrous antisemitism.”

“Last year, the country’s supreme leader said that Israel was a ‘malignant cancerous tumor that has to be removed and eradicated. It is possible and it will happen,’” the US president said, adding that such antisemitism is “unacceptable.”

“America will never tolerate such antisemitic hate,” Trump said. “Fanatics have long used hatred of Israel to distract from their own failures. Thankfully, there is a growing recognition in the wider Middle East that the countries of the region share a common interest in battling extremism and unleashing economic opportunity.”

Those common interests present an opportunity, Trump said, and that “is why it is so important to have full, normalized relations between Israel and its neighbors. Only a relationship built on common interests, mutual respect and religious tolerance can forge a better future.”

He called on the international community to stand up to Iran.

“All nations have a duty to act,” Trump said. “No responsible government should subsidize Iran’s blood lust. As long as Iran’s menacing behavior continues, sanctions will not be lifted: They will be tightened.”

At the same time, however, Trump let Iran know that the US remained open to peace with Tehran – if it is willing to give up its nuclear drive and its regional aggression. In the weeks leading up to the UNGA, Trump spoke of a meeting with Iranian President Hassan Rouhani that never materialized.

“The US is ready to embrace friendship with all who genially seek peace and respect,” Trump said. “The US has never believed in permanent enemies. America knows that while anyone can make war, only the most courageous can choose peace.”

In his third UN appearance, Trump offered a more subdued tone compared to the bombast of his previous speeches in 2017 and 2018, looking to convey a more reassuring presence as he asks Americans for a second term next year despite a fresh push for his impeachment among some Democrats.

While offering his habitual defense of national sovereignty – “the future must never belong to globalists” – Trump tempered his language, stressing the US desire for peaceful relations with all and calling for collective, rather than unilateral action.

Although US special envoy Jason Greenblatt was in Israel over the weekend to discuss the pending publication of Trump’s peace plan, known as the “Deal of the Century,” the president did not discuss the plan or his vision for Israeli-Palestinian peace during his talk.

The response to Trump in the chamber was relatively muted, a year after the crowd laughed when he boasted about his achievements and gasped in 2017 when he threatened to wipe out North Korea.

An Iranian diplomat sat in Iran’s second-row seat for Trump’s speech. Rouhani was at his New York hotel, not in the UN chamber.

Las year, the UN pulled out of the Iran deal to curb the Iranian republic’s nuclear powers, initially worked out in 2015 between Tehran and the six world powers, including the US, France, Germany, the UK, China and Russia, which have worked to maintain the deal. The US wants to negotiate a better agreement.

In remarks to media on Tuesday, Rouhani said he was open to discuss small changes, additions or amendments to the 2015 nuclear deal if the US lifted sanctions imposed on his country.

French President Emmanuel Macron, trying to create conditions for talks between Washington and Tehran, said he hoped there could be progress on Iran on Tuesday after he held talks with Rouhani on Monday.

“We have to get back around the table to have a frank and demanding discussion,” Macron told reporters.

German Chancellor Angela Merkel met Rouhani on Tuesday and said she told him she would welcome US talks with Iran, but that it was unrealistic for Tehran to think sanctions would be lifted before talks take place.

Over the past week, Trump has tightened economic sanctions on Iran and ordered more US troops to Saudi Arabia and the United Arab Emirates in a show of support for those US allies in the tense region.

The US, European powers and Saudi Arabia have blamed Tehran for the attacks, which were claimed by the Iran-aligned Houthi group in Yemen. Iran has denied any involvement.

Rouhani said those who doubt that Yemen has the military capability for such attacks, “aren’t saying who the culprit is.”

“Britain, France and Germany have said that Iran is responsible for the recent attack on Saudi Arabia,” Prime Minister Benjamin Netanyahu said in Jerusalem. “Let me say on behalf of Israel, very simply: Iran did it. A to Z.”

The prime minister, who has generally addressed the UN General Assembly on the dangers of Iran, will not be in New York this year because of post-elections politics regarding the formation of a government, but he still spoke out against Iran.

“Israel will know to defend itself against this type of aggression,” Netanyahu said. “We call on all members of the international community to join President Trump’s effort to increase the pressure on Iran. That’s the only way to stop Iran’s aggression.”

Blue and White leader Benny Gantz also issued a statement “applauding President Trump on his call for an international front against the Iranian nuclear threat.

“Iran is first and foremost a threat to international peace and is a hostile force against regional stability,” Gantz said. “It is incumbent upon the international community to impose sanctions and to enforce sanctions already in place in order to put pressure on Iran.”