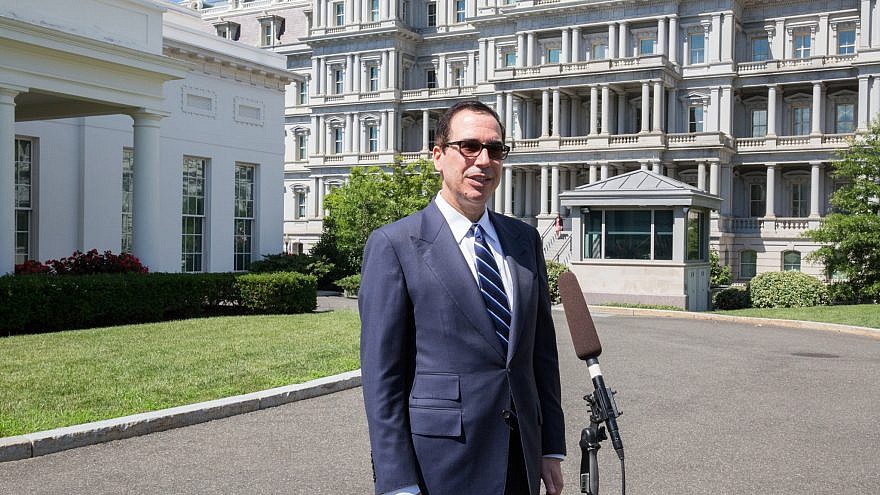 (September 12, 2019 / JNS) The Trump administration assured on Thursday that its “maximum pressure” campaign against Iran will continue, said U.S. Treasury Secretary Steven Mnuchin amid mixed signals that U.S. President Donald Trump could meet with Iranian President Hassan Rouhani without preconditions and could even relax some sanctions in exchange for negotiations—both possibilities the secretary rejected.

In a CNBC interview, Mnuchin said that even with the Tuesday ouster of U.S. National Security Advisor John Bolton, the administration is “executing on a maximum pressure strategy against Iran.”

Mnuchin also said, “We have cut off their money, and that’s the reason why, if they do come back to the negotiation table, they’re coming back.”

Regarding possible negotiations between Washington and Tehran, “If the president can get the right deal that he’s talked about, we’ll negotiate with Iran,” said Mnuchin. “If not, we’ll continue the maximum pressure campaign.”

In Israel, Nathan Sales told The Jerusalem Post on Thursday that while the administration isn’t seeking regime change in Iran, it will maintain its “maximum pressure campaign to get Iran back to the table” for a “better deal” than the 2015 nuclear deal, which the United States withdrew in May 2018 reimposing sanctions lifted under it along with enacting new financial penalties against the regime.

Sales declined to answer if Trump will meet with Rouhani at the United Nations later this month and if the United States would agree to a French $15 million assistance package for Iran in exchange for complying with the nuclear deal.

Mnuchin acknowledged there were “direct conversations” with the French about the matter. “They absolutely understand they would need waivers from the U.S., and that’s not something we’re contemplating at the moment,” he said.

Despite Bolton leaving, Sales said that “U.S. Iran policy is the president’s Iran policy. The president has been very clear that it is the worst state sponsors of terrorism … and imposed historically severe sanctions on Iran.”