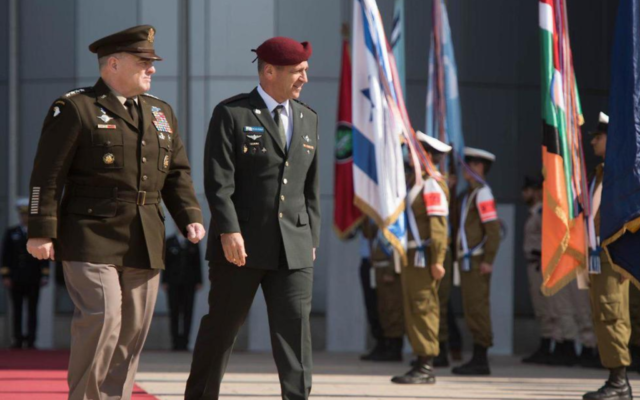 The top US general is visiting Israel for meetings with top military leaders, the latest in a series of high-level military meetings amid heightened tensions with Iran.

Israel’s military said in a statement that Milley’s visit was a sign of “the depth of the partnership between the forces and its importance in promoting regional stability.” The two discussed “a series of operational topics and regional developments,” the army said.

A readout from Milley’s office said “Gen. Milley reaffirmed the US commitment to its relationship with Israel.”

Milley’s visit is the latest in a series of top US military visits to the Jewish state in recent weeks.

Last week, US Air Force Chief of Staff David L. Goldfein visited Israel to participate in the Blue Flag joint military exercise, which pitted 70 combat planes from five air forces against each other in 19 sorties across six locations around the country. For two participating militaries, Israel and Italy, it marked the first-ever use of the new stealth F-35 in an international exercise, making it “the most advanced international exercise ever held in Israel,” according to the IDF.

On November 10, the commander of American military forces in the Middle East arrived in Israel for meetings with the IDF’s top brass.

It was Gen. Kenneth F. McKenzie, Jr.’s first visit in Israel since becoming head of the US military’s Central Command, or CENTCOM, in March. McKenzie’s trip was the second-ever visit by a CENTCOM commander to the Jewish state.

The string of high-level visits come amid rising tensions between Israel and Iran. Last week, after Iranian forces fired rockets at the Israeli side of the Golan Heights, the Israeli Air Force struck dozens of Iranian military targets in neighboring Syria.

The strikes were the latest Israeli attack against Iran-linked targets in Syria in recent years. Israel has warned against a permanent Iranian presence near the frontier.

Military ties between the US and Israel have been somewhat strained in recent months, as the US has begun withdrawing from the region, leaving Israel alone to confront an increasingly aggressive and emboldened Iran.

Though Israeli officials have refrained from specifically criticizing US President Donald Trump for the withdrawal, they have more obliquely expressed concerns about the trend.

On a visit to the northern border on Sunday, Prime Minister Benjamin Netanyahu said Iran was planning new attacks in the region, but insisted Israel was working to disrupt them.

In his comments Netanyahu cited McKenzie, who told The New York Times earlier this week that Iran was unlikely to have been deterred by increased US troop deployments in the Middle East, and remained on track to carry out a large-scale attack in the region.

“My judgment is that it is very possible they will attack again,” McKenzie told the newspaper.

“Pay attention to what Gen. McKenzie said,” Netanyahu said Sunday. “Iran is planning additional attacks. I can confirm that, and I can confirm to you that we are continuing with our plans to disrupt that aggression by various means.”

In June, Trump called off a retaliatory strike after Iran downed an American drone that Tehran said entered its airspace. The US, which denied the drone entered Iranian skies, was later reported to have launched a limited cyberattack on Iran.

Last month, around half of Saudi Arabia’s oil production capacity was knocked offline due to an attack claimed by the Iranian-backed Houthi rebels in Yemen. There was no response to that attack, which the US, Israel and others also blamed on Iran.

The White House’s decision last month to pull troops out of northern Syria and abandon Kurdish allies there has also been seen as a sign of Trump’s general lack of willingness to engage militarily in the region.