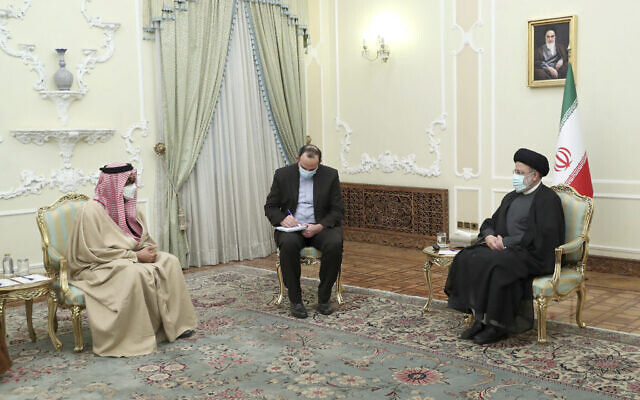 The national security adviser of the United Arab Emirates met Monday with his Iranian counterpart and the country’s hard-line president in Tehran, a major visit for the Gulf Arab federation that has long viewed the Islamic Republic as its main regional threat.

The visit by Sheikh Tahnoon bin Zayed Al Nahyan comes as the Emirates and Saudi Arabia are both negotiating with Iran amid efforts in Vienna to save Tehran’s tattered nuclear deal with world powers.

The UAE, home to Abu Dhabi and Dubai, reached a diplomatic recognition deal last year with Israel, increasing tensions with Tehran. The UAE has long served as a lifeline to the outside world for Iran amid international sanctions.

Sheikh Tahnoon, wearing a navy blue thobe, black suit jacket and his signature aviator sunglasses, met with Ali Shamkhani, the head of Iran’s Supreme National Security Council. The two men smiled and shook hands in front of journalists before their meeting, a large map of Iran and the Persian Gulf looming behind them, with just a sliver of the Emirates visible on it.

Sheikh Tahnoon’s brother is Sheikh Mohammed bin Zayed Al Nahyan, Abu Dhabi’s powerful crown prince and long the de facto ruler of the Emirates, a federation of seven sheikhdoms. Under Sheikh Mohammed, the UAE has embarked on a rapid expansion of its military forces to counter what they see as the threat of Iran. The Emirates also hosts US and French forces and its Jebel Ali port is the US Navy’s busiest port of call outside of America.