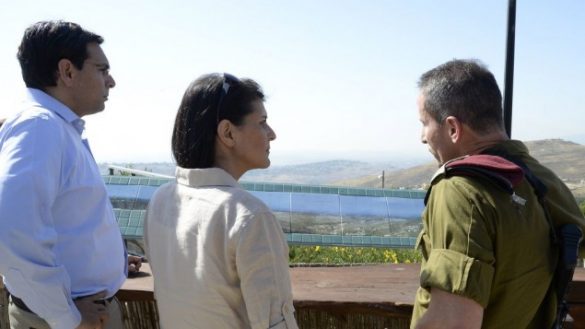 Israel’s deputy chief of staff, Maj. Gen. Aviv Kochavi, and the commander of the UN peacekeeping force in southern Lebanon reportedly got into a heated argument while giving a tour of the tense border to visiting US Ambassador to the United Nations Nikki Haley on Thursday.

According to a Channel 2 news report Sunday, Haley was being briefed by UNIFIL commander Maj. Gen.l Michael Beary, who told her the situation on the border was stable and did not require further intervention.

Beary was interrupted by Kochavi, who told Haley that UNIFIL was not doing its jobs properly and was wary of entering the villages and cities of southern Lebanon and confronting the Hezbollah terror group.

Kochavi called on Haley to help change the mandate of the international force to enable it to disarm Hezbollah, the report said.

A diplomat later apologized to Haley for the outburst, but she reportedly said it was good that she got to see the reality of the Israeli side and that it would influence her work at the world body, where she has been a staunch supporter of Israel.

UNIFIL, or the United Nations Interim Force in Lebanon, is an international force created by the Security Council in March 1978 to maintain the border between Israel and Lebanon. Since 2006’s Second Lebanon War the force has also been charged with monitoring the cessation of hostilities between the two countries, supporting Lebanese troops deployed in the south of the country, and ensuring humanitarian access to civilians in the region.

Hezbollah has significantly built up its weapons stockpile since the 2006 war and has upgraded its arsenal to about 150,000 missiles, Israeli officials say. Israel also fears that some advanced weapons like surface-to-sea weapons or anti-aircraft missiles might have reached Hezbollah.