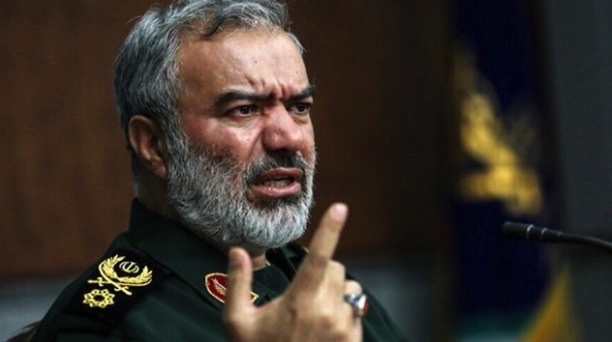 Top Iranian general: ‘When we strike at America it will be with great force’

The deputy commander of Iran’s Islamic Revolutionary Guard Corps said in a recent interview that when the time was right, Iran would strike the United States “with great force.”

In an interview with Hezbollah’s Al-Manar TV on Jan. 4, Admiral Ali Fadavi said that soon, the world would witness America’s full retreat from the Middle East.

“We do not have the slightest doubt that at the right time, when we strike America—the Great Satan—and its Zionist followers, we will strike them with great force. As Imam Khamenei famously said a long time ago, when the Zionists were entertaining some illusions … he said, ‘If they take even the smallest step [against us], we will turn Haifa and Tel Aviv into dust,’” said Fadavi.

“If the Zionists do something stupid and take a step against us, whether big or small, we will see this as a sign that Allah decreed we should be attacked so that we could retaliate. This would mean the annihilation of the Zionists,” he added.

“It is a fact that the Zionists will go away much faster than the time frame determined by the Leader [Khamenei]. Soon we will witness the annihilation of the Americans and their dominance over the world, and specifically over this region. Soon we will see them leave the region. This will definitely happen,” said Fadavi.