Thousands of Ethiopian Jews gather in Jerusalem for Sigd 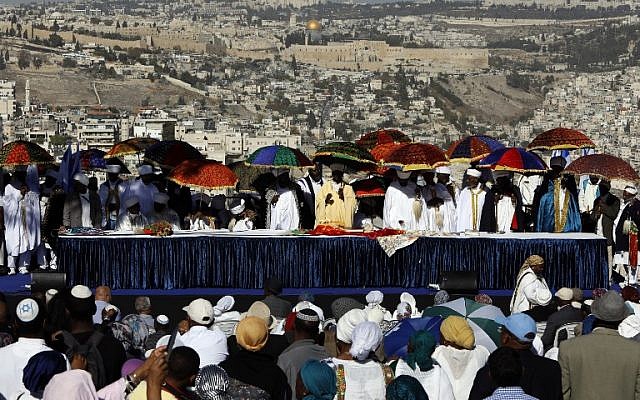 Thousands of Ethiopian Jews gathered in Jerusalem Thursday to celebrate the festival of Sigd, marking the community’s centuries-old aspirations to return to the holy city.

On a sunny, warm winter’s day, busloads of people came from all over the country to participate in ancient prayers led by the kessim, the religious leaders of the community, dressed in traditional robes and shaded by brightly colored parasols.

In addition to the prayers, recited in the Ethopian Ge’ez language, the stone paths and green lawns of Jerusalem’s Haas Promenade, overlooking the Old City, were packed with Israelis of all backgrounds who came to learn about Ethiopian culture and heritage.

Following the celebrations on the promenade, many people made the pilgrimage to the Old City and the Western Wall.

The name Sigd is Ge’ez for “prostration,” and the festival celebrates the renewal of the covenant between the Jewish people, God and the Torah. For centuries it also marked the community’s belief that they would return to Jerusalem, and nowadays it is an opportunity to give thanks for that dream becoming a reality.

During the one-day holiday, traditionally held on the 29th of the Hebrew month of Heshvan — 50 days after Yom Kippur, recalling the time span between Passover and Shavuot — some celebrants fast as they gather on the hill, like the Israelites at Sinai, where they recite Psalms and read from the Orit, the Ethiopian Torah scroll.

There are those who believe that the patriarch Abraham was shown Mount Moriah from this spot where the promenade is now situated, which is one of the reasons the Ethiopian Jewish community gathers there each year.

It’s been more than 40 years since the Ethiopian community first came to Israel, but Sigd was only declared a national holiday in 2008.

Several stands along the promenade were selling t-shirts reminding people of an Ethiopian Israeli who is being held by the Hamas terror group in Gaza.

The Mengistu family flew to the US a week ago to seek support for their son’s release, including at the United Nations and the annual conference of the Jewish Federations of North America. They also met with US special envoy to the Middle East Jason Greenblatt to discuss efforts for releasing their loved one.