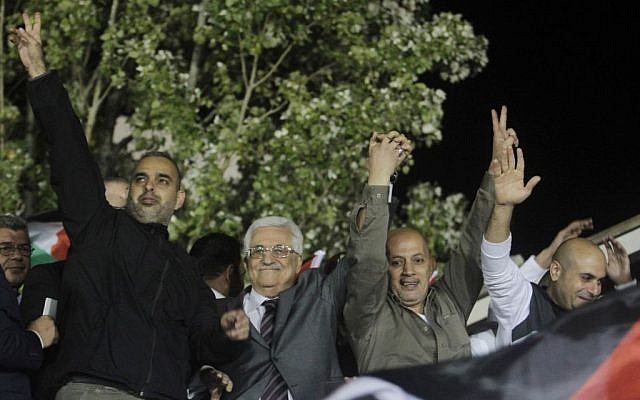 The Palestinian Authority has allocated more than NIS 1.24 billion ($330 million) for payments related to security prisoners and so-called “martyrs” in its 2018 budget, according to a new report published by a Jerusalem-based research institute.

According to the Jerusalem Center for Public Affairs report, which cited the Palestinian Authority’s detailed budget for the year, the PA set aside NIS 550 million ($146 million) for payments for current and past security prisoners and their families.

The amount includes salaries for 5,000 families of prisoners, funds for commissary purchases of 6,000 prisoners, stipends for 5,500 released prisoners, grants for 1,500 prisoners upon their release, and other expenditures, the report said.

The PA set aside NIS 488 million ($129 million) and NIS 552 million ($146 million) for payments regarding security prisoners in its 2016 and 2017 budgets, respectively, according to the research institute.

Many security prisoners are convicted terrorists who killed or participated in the killing of Israelis.

But the total number of security prisoners who are convicted terrorists is disputed by Israelis and Palestinians.

Yossi Kuperwasser, the author of the JCPA report, said in a phone call that “99.9% of [security] prisoners are convicted terrorists.”

However, an Israel Prisons Service pamphlet from 2007 says 70% of Palestinian security prisoners “have blood on their hands,” according to the Washington Post.

Hassan Abed Rabbo, a spokesman for the PA Prisoners Affairs Commission, however, said in a phone call that approximately 500 prisoners are serving life sentences in Israeli prisons, including a few hundred convicted of killing Israelis.