‘The Port of Beirut has become the Port of Hezbollah’ 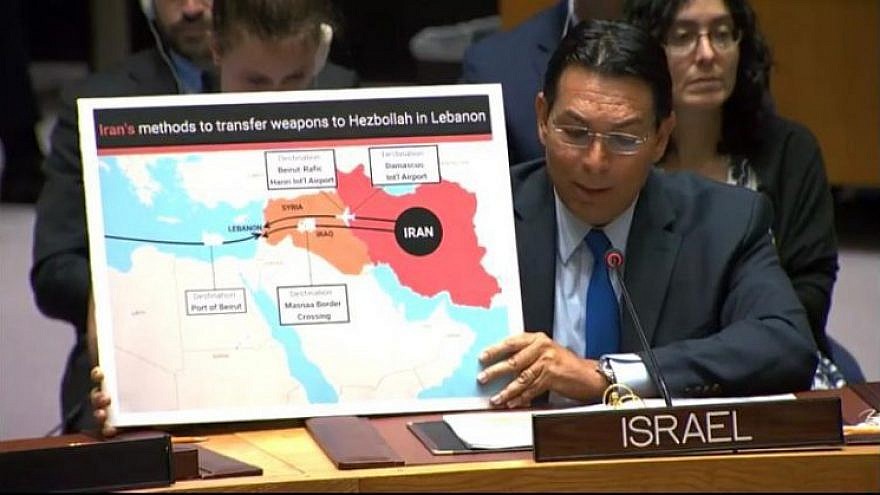 Speaking at the United Nations headquarters just days after Iran seized a British oil tanker and amid growing tension between the Islamic republic and the West, Danon urged the international community to take action against Tehran and counter its regional aggression.

“The Iranian regime is transferring weapons [to Hezbollah] in various ways,” said Danon. “The Quds Force exploits civilian airports in Damascus and Beirut—civilian airports—as well as civilian land infrastructure on the Syria-Lebanon border to smuggle weapons, dual-use items and other capabilities.”

But recently, he said, new evidence had come to light indicating that Iran was also making use of civilian maritime routes.

“In the years 2018 and 2019, Israel found that Iran and the Quds Force have begun to advance the exploitation of civilian maritime channels, and specifically the Port of Beirut, for this same purpose. A civilian port. The Port of Beirut is now the port of Hezbollah,” said Danon.

During his remarks, Danon displayed a map on which with the various routes used by Iran to arm Hezbollah were marked, and accused Iran of violating U.N. Resolution 1701.

Danon warned that the international community “does not have the luxury of giving the Iranian regime the benefit of the doubt,” adding that “now is not the time for optimism, but for realism. It is the time to find partners who share our goal of confronting this force of chaos.”

Lebanon’s U.N. Ambassador Amal Mudallali called Danon’s remarks “direct threats” to Lebanon’s “peace and civilian infrastructure,” and said that if Danon’s intent was to prepare the international community for an Israeli attack on Lebanon, “This council should not stay silent and should uphold its responsibility to prevent Israel from launching another war on Lebanon.”