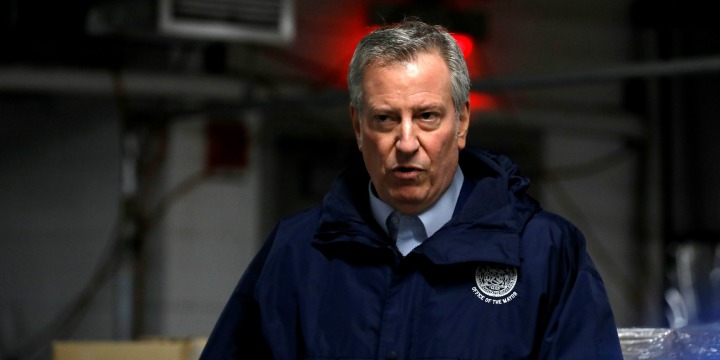 ‘The Mayor Says You Jews Are Getting Us All Sick’: NYC Couple Cite de Blasio During Violent Assault on Brooklyn Hasidim

A married couple who were arrested in Brooklyn after they attacked a group of Hasidic Jews in a bid to rip off their coronavirus protection masks reportedly cited New York City Mayor Bill de Blasio as justification during the assault.

The attack occurred on Sunday night in the Williamsburg section of the borough. Paulo Pinho, 35, and wife, Clelia Pinho, 46, jumped out of their vehicle at Bedford Ave. and Ross St. where they confronted the three male victims, police said.

“You Jews are getting us all sick,” the couple yelled at a trio of men, according to police sources quoted by the New York Daily News on Monday, before adding: “The mayor says you Jews are the reason we’re getting sick.”

New York Mayor de Blasio sparked anger among Jewish leaders at the end of April for singling out “the Jewish community” in a tweet condemning the alleged violation of coronavirus distancing restrictions at the public funeral of the late Rabbi Chaim Mertz.

Jonathan Greenblatt — head of the Anti-Defamation League (ADL) — responded to the mayor by telling him that “generalizing against the whole population is outrageous especially when so many are scapegoating Jews.”