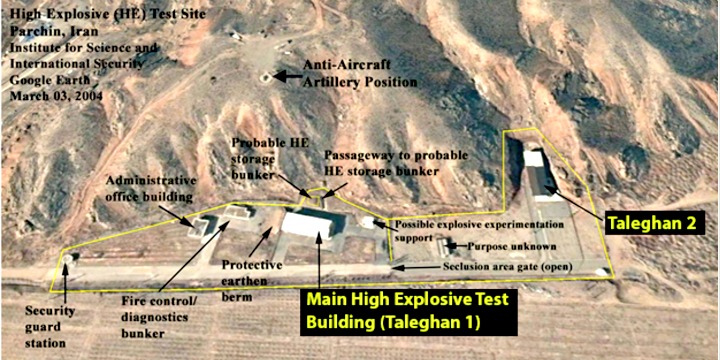 In explaining how the 2015 nuclear deal with Iran would prevent the Islamic dictatorship from developing nuclear weapons, the Obama White House claimed on its website that Iran agreed to allow International Atomic Energy Agency (IAEA) inspectors “to access and inspect any site they deem suspicious.” This suspicion, the website continued, could “be triggered by holes in the ground that could be uranium mines, intelligence reports, unexplained purchases, or isotope alarms.”

While the guarantee that Iran would open any suspicious nuclear site to IAEA inspectors sounded good in theory, in practice it has not happened.

The latest episode that exposed the weakness of the guarantees in the nuclear deal was last week’s paper from the Institute of Science and International Security, which concluded that Iran was likely developing or attempting to develop nuclear warheads, based on information learned from the documents that Israel recovered from Iran’s hidden nuclear archive last year.

The paper — written by David Albright, a former weapons inspector and president of the Institute; Olli Heinonen, former deputy director general of the IAEA; Frank Pabian, a former inspector for the IAEA; and Andrea Stricker, a senior policy analyst at the Institute — reports that the Iranian documents show that, under the Amad Plan, there was a project for designing a warhead for a nuclear weapon.

The Amad Plan is Iran’s nuclear weapons research program. After 2003, it was restructured, and parts of it were made covert. One project associated with Amad was called Project 110. Under Project 110 was the Shahid Boroujerdi project.

The documents in the archive show that Iran built an underground tunnel at the notorious Parchin military site in order to accommodate the secret research of the Shahid Boroujerdi project.

“The purpose of Project Shahid Boroujerdi was most likely the production and fabrication of uranium metal components for nuclear warheads,” the Institute’s paper asserted.

“Over the last three months alone, we have conducted over a half dozen studies of the information in the Nuclear Archive,” the paper added.

The authors assessed that the information in the archives “is extremely rich in information about Iran’s nuclear weapons efforts that is actionable in terms of better carrying out inspections.” Additionally, they asserted that Iran’s statements to the IAEA have been “incomplete and duplicitous.” The archives would also allow for the IAEA to better understand the threat posed by Iran’s nuclear weapons program “today and in the future.”