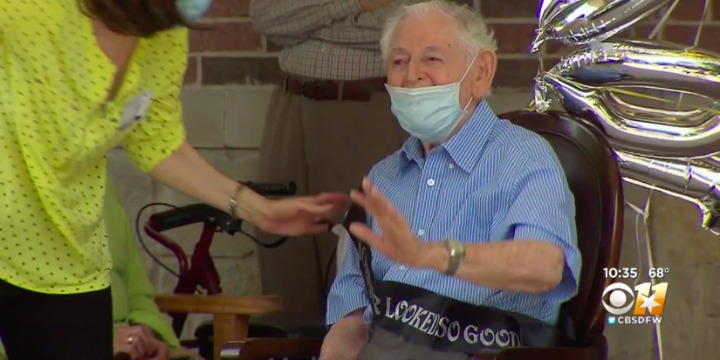 A Holocaust survivor in Texas was surprised with a parade of drive-by visitors on Sunday in honor of his 100th birthday.

A procession of cars and visitors — who were practicing social distancing and wearing masks — drove by Heinz Wallach’s home to help him celebrate the milestone.

The parade was organized by his daughter, Tamar Leventhal, with the help of the Dallas Holocaust and Human Rights Museum.

The gesture left Wallach “speechless,” he told CBS DFW, while Leventhal said, “I’ve been emotional the last two weeks putting it all together and realizing how many people love my father.”

Born in Kassel, Germany, Wallach’s family home was destroyed during Kristallnacht, the pogrom carried out against Jews across Nazi Germany on Nov. 9, 1938. Wallach and his father were then sent to the Buchenwald concentration camp. His mother, father and sister died in the Holocaust.

After being released from Buchenwald, Wallach joined a Zionist organization and on Aug. 15, 1940, he joined a group immigrating to pre-state Israel, according to the Dallas Holocaust and Human Rights Museum.

The journey by sea took several months, but ultimately Wallach’s ship was bombed when it was just off the coast of Haifa. More than 250 people died, but Wallach survived by jumping overboard and he was eventually rescued.