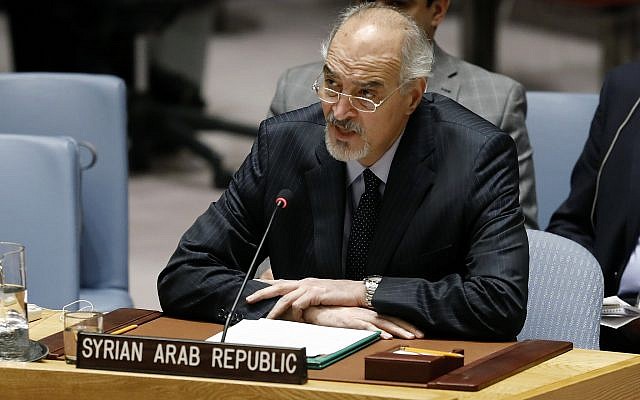 Syria’s envoy to the United Nations warned Tuesday that if the world body did not halt Israeli strikes on his country, Syria would retaliate with an attack on Ben Gurion International Airport outside Tel Aviv.

Speaking at the UN Security Council after a series of IAF airstrikes on Sunday and Monday — most of them launched after an Iranian missile fired from Syria was intercepted over the Israeli Golan Heights on Sunday afternoon — Bashar Jaafari said Israel was only able to act freely in Syria because it had the backing of the US, UK and France in the Security Council.

Syrian state media Sana quoted Jaafari as saying that if the UN Security Council didn’t adopt measures stop Israel, “Syria would practice its legitimate right of self-defense and respond to the Israeli aggression on Damascus International Airport in the same way on Tel Aviv airport.”

“Isn’t it time now for the UN Security Council to stop the Israeli repeated aggressions on the Syrian Arab republic territories?” Jaafari said.

While Israel has repeatedly hit targets inside Syria in recent years to try to stop the transfer of arms to Hezbollah and the entrenchment of Iranian forces, Syria has rarely responded.

It’s unclear if Syria has the ability to strike at Ben Gurion Airport; any attempt to do so would be viewed by Israel as a major escalation.

On Sunday, Israel reportedly conducted a rare daylight missile attack on Iranian targets in Syria. In response, Iran fired a surface-to-surface missile at the northern Golan Heights, which was intercepted by the Iron Dome missile defense system over the Mount Hermon ski resort, according to the Israel Defense Forces.

Hours later, in the predawn hours of Monday morning, the Israel Air Force launched retaliatory strikes on Iranian targets near Damascus and on the Syrian air defense batteries that fired upon the attacking Israeli fighter jets, the army said.

The photographs published by ImageSat indicated storehouses and radar systems at the Syrian airport were destroyed in the strikes.