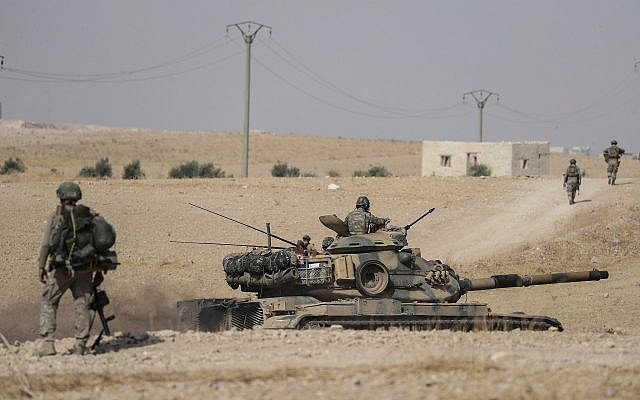 BEIRUT, Lebanon — The Syrian army deployed alongside Kurdish forces on the front line in northern Syria Wednesday but their newfound cooperation saw no let-up in the week-old Turkish invasion, a monitor said.

In a rare scene in Syria’s eight-year-old civil war, government troops and Kurdish fighters were “fighting together” against Turkey’s Syrian proxies northeast of the town of Ain Issa, the Syrian Observatory for Human Rights said.

The Britain-based monitor reported “violent clashes” near the M4 highway — a key east-west artery that links the Kurdish heartland in the northeast with Syria’s second city Aleppo and the Mediterranean coast beyond.

Under the deal announced on Sunday after US President Donald Trump ordered the withdrawal of US troops, government troops have returned to key Kurdish-held areas for the first time in years.

Syrian soldiers have been sent to Manbij, Tal Tamr, Ain Issa and Tabqa in their most significant deployment since the army started withdrawing from Kurdish-majority areas in 2012.

Russia’s special envoy on Syria, Alexander Lavrentyev, said Turkish and Syrian officials were in contact to avoid clashes which “would simply be unacceptable.”

But two Syrian soldiers were killed near Ain Issa on Tuesday in shelling by Turkey’s Syrian proxies — mostly former rebels paid and equipped by Ankara, the Observatory said.

On Monday, artillery fire by the Syrian former rebels killed another soldier in the flash-point city of Manbij, it added.

In the border town of Ras al-Ain, where Kurdish fighters have put up stiff resistance against Ankara’s incursion, battles raged on Wednesday following a night of heavy Turkish airstrikes and artillery fire, the monitor said.

Since its launch on October 9, the Turkish offensive has killed dozens of civilians, mostly on the Kurdish side, and prompted at least 160,000 to flee their homes.