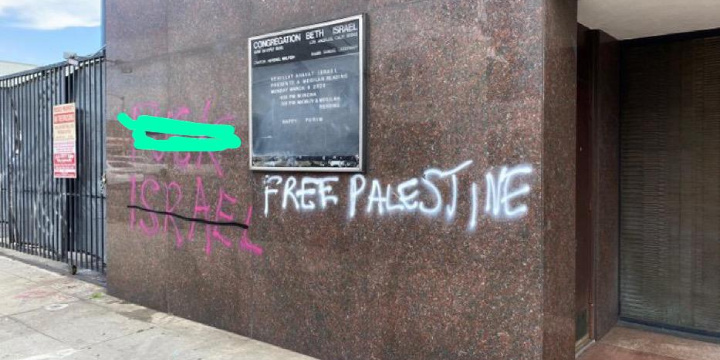 A synagogue was defaced with antisemitic graffiti in Los Angeles over the weekend as the city faced violent riots and looting following the death of George Floyd at the hands of a Minneapolis police officer.

Congregation Beth Israel in the Fairfax District of the city was spray-painted with the phrases “F*** Israel” and “Free Palestine,” local NBC affiliate Channel 4 reported on Saturday.

It is believed that the vandalism was committed by those currently protesting the killing of the unarmed Floyd.

The Anti-Defamation League’s Los Angeles branch commented, “Antisemitism is never ok. The answer to hate and bigotry is not more hate.”

Richard S. Hirschhaut, the Los Angeles Regional Director of the American Jewish Committee, said in a statement to the Jewish Journal, “It is deplorable that certain protesters in Los Angeles today resorted to violence and vandalism.”

“The epithets scrawled on the synagogue wall do nothing to advance the cause of peace or justice, here or abroad,” he added.

He also noted that the targeted synagogue is one of LA’s oldest and members of its congregation have been and are Holocaust survivors.

Liora Rez of the group Stop Anti-Semitism said, “Once again we see vile antisemitism being disguised as activism. To vandalize a synagogue during this horrific time does nothing but further divide a broken country.”