OUR STUDENTS SPEAK: Why ISRAEL Matters to Young Christians 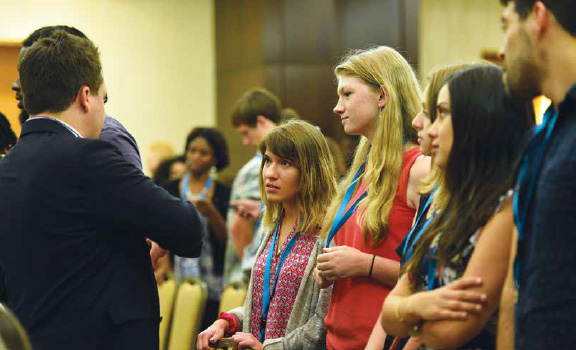 Over 450 college students attended Student Advocacy Training at the Washington DC Summit. Looking across the room at the opening event, the ballroom was packed with passionate young faces. Amazingly, the dedicated students in this room represented only half of the 400 schools where CUFI on Campus has a presence. The students who came to DC this year were the cream of the crop, and some flew from as far away as Hawaii and Alaska to be there. Their energy, enthusiasm, and engagement were palpable from the moment they arrived.

All year long, CUFI members give generously, and sometimes sacrificially, to provide the scholarships for these young Christian college students to receive Israel advocacy training at the Summit. At the beginning of Student Advocacy Training, students heard the touching story of a Holocaust survivor who wrote a check to provide scholarships to CUFI on Campus students. An audible gasp could be heard from nearly every student in the room when they realized who had enabled them to be in DC for this event. More than a few wiped tears away, and you could see in their faces a determination to live up to the sacred trust to secure the future for Israel their benefactors had placed in them. What happened next proved that this trust is well-deserved. A diverse array of top CUFI on Campus student leaders shared their personal motivation for supporting Israel in an inspiring new segment called “Our Students Speak.” This set the tone for the rest of the Summit, and immediately captured the attention of students who were new to CUFI. The testimonies these student leaders shared of their connection to Israel’s story illustrated the core values of the Millennial generation: compassion, justice, and a strong desire to make the world a better place. Israel naturally fits those values, and for this reason young Christians are drawn to the Jewish State when they learn Israel’s story.

Chan Bird, a member of the Crow Nation in Montana, was the first student to speak. As a Native American, Chan identifies strongly with the Jewish people as the indigenous people in the Land of Israel. “I believe that Native America has many commonalities with the people of Israel today. So for example, it is not a hard thing for a Native American to acknowledge the fact that Jews hold cultural, traditional and historical ties to the Land of Israel. Native Americans also likewise understand Israel’s current fight and desire for peace between its neighboring nations and the struggling fight to exist in the midst of hostile detestation of its surrounding nations. But I would like to acknowledge that, as the equivalent fact as Native America is the aboriginals to America, the Jewish people are in fact the aboriginals to Israel.”

Chan went on to explain that those who claim the Palestinian Arabs are the indigenous people of the land and have the stronger right to it are indisputably contradicted by the archaeological evidence that Jews have an unbroken presence in the Land of Israel for over 3,000 years. As a Native American, Chan knows the significance and sacredness of the tie between an indigenous people and their ancestral lands, and he knows how to identify the truth of the Jewish claim to Israel based on simple historical fact.

The next student to speak was Hovsep Chaparian, the son of Armenian Christian immigrants from Syria and Lebanon whose family has suffered intense religious persecution in their native homelands. Before the Holocaust, Armenian Christians suffered a genocide 1.5 million were murdered in 1915. This tragedy is still not globally recognized as an official genocide, but the pain of it has not left the consciousness of the Armenian people. Hovsep’s great-great-grandfather was murdered while his family was forced to watch. He grew up hearing hundreds of horrific stories from his family members of what has happened to his people because of their faith.

When he visited Israel in 2016 with CUFI on Campus, Hovsep met and spoke with Armenian Christians and Arab Christians living in Israel. Then this summer he went to Lebanon and saw the persecution of Christians there with his own eyes. Hovsep shared with the students what he learned from those two experiences. “I reflected a year ago, when I went to Israel with CUFI, and there I saw the Muslim call to prayer in the mornings, Christian evangelical churches, and Jewish temples side by side I thought about the contrast between Lebanon and Israel, and I realized – I knew this again, but I realized firsthand – that Israel is the only safe space for Christians in the Middle East. And this is one of the many reasons why I as an Armenian and as a Christian am proud to be pro-Israel.”

One of the students who spoke, Ashley Garrett, lived in Israel for the past year. She gave a powerful testimony of how Israel’s commitment to humanitarian aid has blessed the world. She also praised the Israel Defense Forces as the most moral army in the world, a fact which has been corroborated by top military officials from other countries who have studied the actions and policies of the IDF.

In Israel, Ashley experienced what it is like for Israelis to live in constant awareness that they are surrounded by people who might want to kill them. This confident, fearless American young woman discovered the fear that comes from seeing an abandoned bag on a bus in Israel, which could be a bomb. She worried about her friends who served in the IDF, realizing every time they left that they might not come back.

But the incident that really drove home for Ashley what it is like to be an Israeli came when her necklace, a menorah, attracted the attention and hostility of a man on the streets. After noticing her necklace, the man asked if she was Jewish in a tone that suggested she might be in danger. Ashley froze in fear, and in her mind she wondered why it would be an issue even if she was Jewish. But when she told him she was a Christian, the man relaxed and acted as if everything was OK. That angered her. “This is the reality that they face. They just want to live. They just want to experience life, and just by being Jewish they’re hated in their own country. It’s disgusting!”

Yet despite this reality, and in fact because of it, Israel leads the world in the skill, technology and readiness to be the first responder to humanitarian disasters around the globe. Ashley saw for herself the selflessness of Israelis who put themselves in danger every day in order to save lives, and that is why she admires Israel. She strongly encouraged the students in the room to use Israel’s humanitarian aid as the primary way to combat BDS and disarm the arguments of the people who hate Israel.

For another student, Hannah Washington, it is Israel’s empowerment of women compared to the oppression and abuse of women in surrounding Middle Eastern countries that speaks to her. “Israeli women are not immune to violence, because of course Israel is not a perfect place, but unlike these surrounding countries women are not treated as second-class citizens in their own country. They are completely equal, and their country does not glorify or tolerate things like honor killings or female genital mutilation. Not only that, women in Israel THRIVE.”

Other students gave additional personal reasons for supporting Israel and they all spoke with passion, conviction, and the undeniable honesty of their own experience. These are the things no anti-Israel activist can argue against, because these stories belong to the students and cannot be twisted. Hearing these stories at the beginning of the Student Advocacy Training electrified the whole group, and empowered them to take ownership of Israel’s story in a personal way.

For students new to CUFI, these testimonies from their more seasoned peers inspired them that supporting Israel and being part of this organization is an excellent way to achieve their goal of making the world a better place. For veteran CUFI on Campus activists, these stories inspired them to use their own experiences as the foundation of their lifelong pro-Israel advocacy. For all of them, this event and the rest of their Summit experiences left an indelible mark on their hearts that will reverberate throughout their future careers, families, communities and churches for many generations to come. Whatever you have done and will do, as a member of CUFI, to support these students will have an eternal impact. Israel’s future is in good hands.