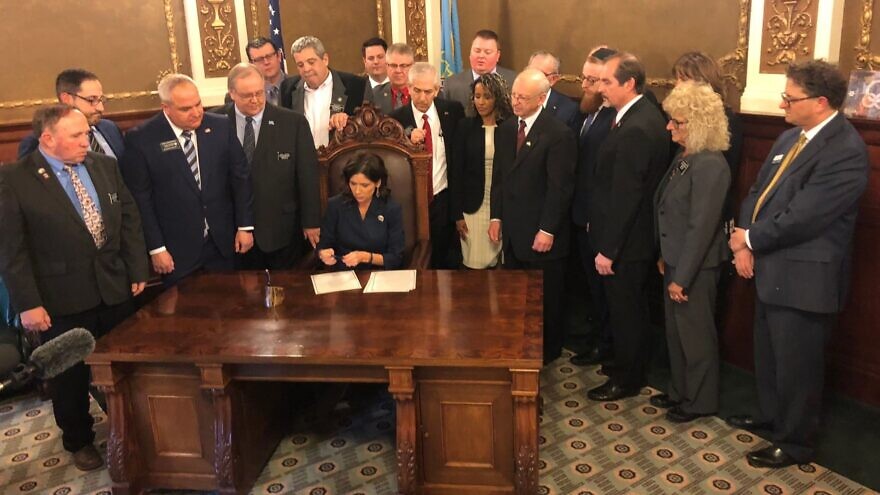 “Israel is one of our nation’s closest allies, and their success is critical to American national security,” said Noem. “Today, we reaffirm that South Dakota stands with Israel and will only contract with businesses who agree to fairly compete. Our state will not stand for any discrimination based on race or religion.”

The executive order requires vendors seeking contracts with state agencies, authorities, commissions, departments or institutions of the State of South Dakota to not engage with companies that participate in boycotts of Israel. This order applies to companies or contractors with more than five employees who enter into a contract with South Dakota that involves the expenditure of $100,000 or more.

During the 2019 legislative session, the South Dakota House of Representatives, with the Senate concurring, passed House Concurrent Resolution 1005 that declared opposition to and condemned the BDS movement.

“For over a decade, the BDS movement has attempted to erode the confidence in Israel’s legitimacy by inflicting economic harm and limiting commercial relations through boycotts, divesting and imposing sanctions against Israel,” said Rabbi Mendel Alperowitz, director of the Chabad Jewish Center of South Dakota. “I am grateful that Governor Noem is standing up to this ugly resurgence of anti-Semitism and unjust practice of discrimination against Jews, and for her continued support of Israel.”

“South Dakota has one of the smallest Jewish populations in the nation, yet the state’s strong support for the nation of Israel is unparalleled,” said Stephen Rosenthal, chairman of South Dakotans for Israel. “This action sends a clear message that anti-Semitism will not be tolerated in South Dakota.”

“Governor Noem has taken bold action to combat the insidious BDS movement that encourages punitive actions solely against Israel,” said Laurence Bolotin, director of the AJC Chicago Region, which covers South Dakota. “BDS proponents do not advance peace at all. Peace only will be achieved in direct bilateral negotiations between Israel and the Palestinian Authority.”

The international Israel education organization StandWithUs welcomed the legislation, stressing that the order does not impact any individual’s or company’s right to free speech, and that it’s meant to protect taxpayer funds and state policy from companies that discriminate against Israel.

CEO Roz Rothstein said “when states stand up against anti-Israel bias and discrimination, it benefits the state’s economy; joint research with Israel in agriculture, science and environment; and says a firm ‘no’ to the BDS movement, which encourages anti-Semitism and discourages a peaceful negotiated solution between Israel and its neighbors.”

Similarly, the Israeli-American Coalition for Action applauded the governor’s decision and said the move will protect the financial interests of the state’s citizens.

“South Dakota’s anti-BDS executive order will protect the financial interests of the state’s citizens by ensuring that state funds are shielded from the economic damage and discrimination caused by companies that engage in boycotts against Israel,” said IAC for Action’s executive director Joseph Sabag. “This executive order carefully regulates commercial activity, and not the conduct of private speech. It is similar to many other anti-discrimination laws that protect, among other categories of people, women, racial minorities and LGBTQ individuals.”