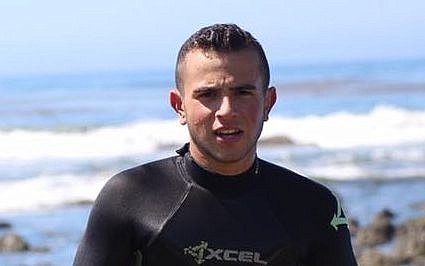 An Israeli soldier injured in clashes along the Gaza border was identified on Monday as Yoadd Zaguri, a lone soldier from Los Angeles.

Zaguri, an infantryman in the army’s Nahal Brigade, was moderately wounded Sunday after an improvised explosive device was thrown at troops during rioting in northern Gaza.

He was hospitalized at Ashkelon’s Barzilai Medical Center, where he underwent surgery for shrapnel wounds to his neck.

“I heard ‘shrapnel’ and I thought it was just a scratch and I was very optimistic. But then I realized that the injury was to his neck and was more serious,” Ela Avimor, who is Zaguri’s girlfriend and also a lone soldier from Los Angeles, told Channel 12 news from the hospital.

Avimor said Zaguri had fought to enlist despite objections from his parents and the bureaucratic obstacles he faced upon arrival.

“He immigrated to Israel voluntarily,” she said. “At first he had all sorts of problems but he fought in order to enlist.”

Channel 13 news reported that Zaguri’s parents were coming to Israel to visit him. He was said to be in moderate condition Monday following his surgery.

During the same clash in which Zaguri was wounded, 19 Palestinians were injured by Israeli gunfire, the spokesman for the Hamas-run Gaza health ministry said in a statement to reporters. They suffered injuries of varying degrees, he added.

Palestinian media reported that the rioters tried to breach the security fence, but were driven back by Israeli gunfire.

In response to the riot, Israeli tanks shelled two Hamas observation posts near the border, the army said.

The military said that during the riot, dozens of Palestinian rioters burned tires and threw improvised explosive devices at the security fence surrounding the northern Gaza Strip and the Israeli troops on the other side.