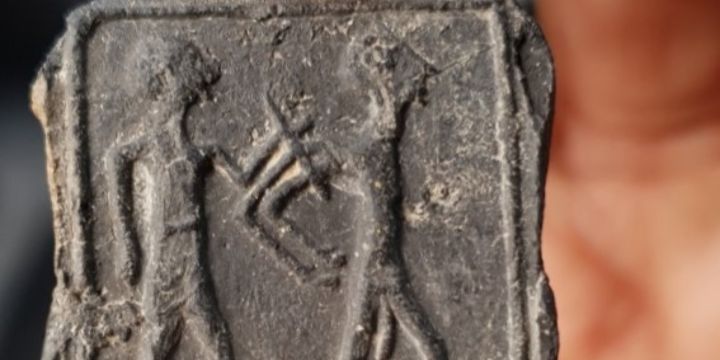 The tablet was found by Imri Elya of Kibbutz Nirim, who was touring the Tel Jemmeh archaeological site near Kibbutz Re’im in Israel’s south. He and his parents handed it over to the IAA, whose researchers determined that it was an almost unique find that had never yet been uncovered in Israel.

The 2.80 x 2.80 cm clay artifact was determined to date from the Late Bronze Age (12th-15th centuries BCE), an era when Canaanite city-states ruled the land of Israel under Egyptian domination. It depicts a scene of a man leading a prisoner, whose hands are tied behind his back. The artist’s fingerprints still appear on the reverse side of the tablet.

Archaeologists Saar Ganor, Itamar Weissbein and Oren Shmueli of the IAA said in a press release, “The artist who created this tablet appeared to have been influenced by similar representations known in Ancient Near East art. The manner in which the captive is bound has been seen previously in reliefs and artifacts found in Egypt and northern Sinai.”