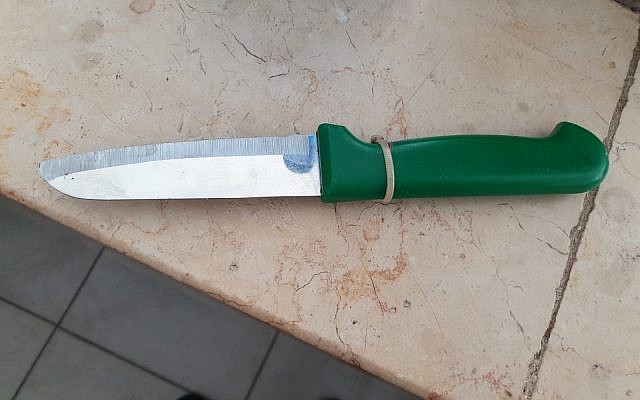 Border Police officers arrested a Palestinian man Monday at the Tomb of the Patriarchs in Hebron on suspicion of planning a stabbing attack, as Israel remained on edge following a deadly shooting and knifing the previous day.

The suspect, in his 20s and from the Palestinian town of as-Samu, was found to be carrying a knife, and during questioning said he planned an attack, Israel Police said in a statement.

Officers manning a security post close to the holy site became suspicious of the man, who was loitering nearby and appeared to be nervous and anxious.

Security forces approached the suspect with the intention of conducting a search of his person, but he resisted, the statement said. He was arrested and a search uncovered the knife.

His identity was not immediately cleared for publication.

On Sunday, a Palestinian man stabbed a soldier to death and then opened fire on Israeli vehicles at two locations in the northern West Bank, killing a father of 12 and seriously injuring another soldier.

Police are searching for the assailant, who fled into a nearby Palestinian town and is thought to be armed and dangerous.

Also on Sunday, a 17-year-old Palestinian girl was arrested as she tried to smuggle a knife into the Tomb of the Patriarchs.