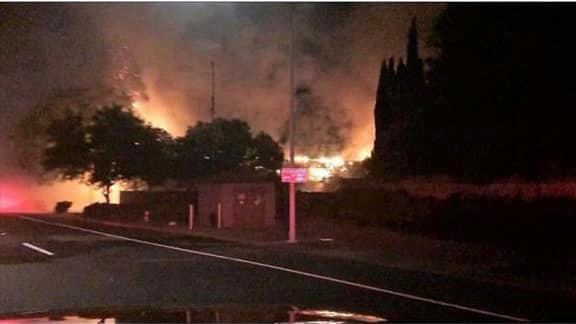 A San Francisco-area synagogue went up in flames, with the back half of the building incinerated, Chabad.org reported.

According to the Hasidic movement’s website, Rabbi Raleigh Resnick of Chabad of the Tri-Valley in Pleasanton, was awakened by a call from the police at 1 a.m. and rushed to the synagogue to save the Torah scrolls housed there.

“I had been in the building just a few hours earlier, so I knew that no one was there or in any danger,” he told Chabad.org. “But when you hear that the building is on fire at 1 in the morning, the only thing I was thinking about were the Torah scrolls.”

Fireman were battling the blaze when he arrived to find that the Torahs were undamaged, he said.

“Afterwards, some of the firefighters approached me and asked what were these scrolls that I so urgently wanted to save. I shared with them some of the history of the Torah,” he said.

Resnick added: “The community will come together not only to rebuild the destruction, but to construct an even more beautiful edifice in its place.”

On his blog, the rabbi wrote that fire officials do not know how the fire in the wee hours of Aug. 9 began and “there are no initial signs of foul play or arson.”