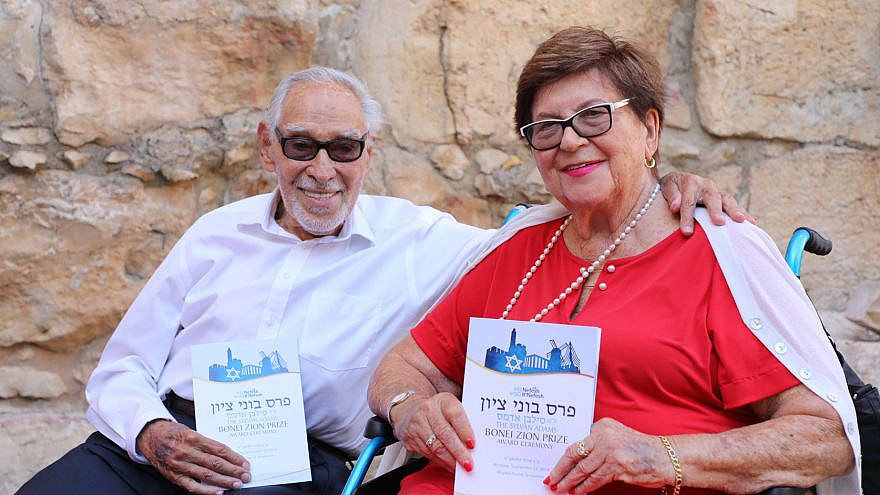 (October 3, 2019 / JNS) Nothing really prepares you for the Smoky smile and the twinkle in an eye undimmed by nearly a century on earth.

And when Harold “Smoky” Simon grins at you, it’s hard to remember that, at 99, the man is one of a dwindling club: the heroes of Israel’s War of Independence.

“Unhappily, that’s true,” he says in an accent reflecting his South African roots. “We were an endangered species, but now even that is sadly coming to an end.”

Simon went on to help found not only the infant country’s air force in May of 1948, as Chief of Air Operations in Israel’s War of Independence, but also World Machal, whose thousands of volunteer soldiers from around the world have served alongside the Israel Defense Forces, beginning in 1948. Years later with a partner, he established the Simon & Wiesel life-insurance agency, one of Israel’s top firms.

For all these accomplishments and the remarkable impact he’s had on the Jewish state since its birth, Simon received Nefesh B’Nefesh’s Sylvan Adams Bonei Zion Lifetime Achievement Award on Sept. 24, shortly before the start of the High Holidays.

It was his years flying as a navigator-bombardier for the South African Air Force (SAAF) during World War II that Simon says prepared him for this extraordinary life and his role in Israel’s history.

In 1948, as newlyweds, Simon and his wife, Myra, who had been a meteorologist in the SAAF, joined a South African Zionist Federation group to volunteer to fight with their brethren in Palestine/Israel in what was threatening to be a serious war against the Arabs.

“Fighting the Nazis gave us the skills and the experience we needed to fight for Israel,” he says more than seven decades later. “Without that expertise, none of us would have known how to win that war.”

Still, he adds, “we had to muster all of our nerve to do the job against these powerful enemies. We were up against six Arab armies—the Egyptians were supplied by the Brits, the Syrians by the French, and we didn’t have a single combat plane of our own.”

What Israel did have: old German planes sold to them by the Czechs, smuggled in and reassembled in Israel.

And Simon reminds us of a statement made by Arab League’s Secretary-General, Abdul Rachman Azzam Pasha on May 1, 1948: “If the Zionists dare to establish a state, the massacres we would unleash would dwarf anything which Genghis Khan and Hitler perpetrated.”

“These were difficult times,” acknowledges Simon. “None of us knew how it would turn out, but as proud as I’d been to be one of millions fighting to defeat the Nazis, it was even more emotional when you are part of a small bunch fighting for your own people, your own country,”

Those who lived through these harrowing times, he says, “can truly see how, with all the odds against us then, there is far more than human effort behind that victory. Returning to our ancient land, we are living a miracle of biblical proportions here.”

In fact, Simon’s first flight, on May 14, had the distinction of taking off from Palestine, later landing in the same spot when it was officially Israel, after Ben-Gurion declared the state while they were in the air.

After the war, the Simons returned to South Africa, where their four children were born and he entered the insurance business. In 1962, the family made aliyah, and with Moshe Wiesel, he established Simon & Wiesel. “In those years, the country had gone from a state of austerity to a growing economy,” he says. “It was a wonderful time to be here.” And his fledgling insurance firm found fertile ground in that burgeoning economy.

In 1968, Simon was elected as chairman of World Machal, representing nearly 5,000 volunteers from 59 countries who fought in the War of Independence. He has served in that capacity for a half-century, as more “Machalniks” have joined over the years to help strengthen Israel’s military.

These foreign soldiers are just part of the backing Israel has enjoyed over the years from Jews around the world. Simon says “without their support, in good times and hard times, too, Israel could not have survived.”

Nefesh B’Nefesh honored those contributions by English-speaking olim as well. “In every area of expertise within the country, one can find an English-speaking oleh [‘immigrant’] who has introduced seismic, innovative change in Israel,” said Rabbi Yehoshua Fass, the organization’s co-founder and executive director. “Smoky Simon is an extraordinary individual who has succeeded in creating meaningful change in so many fields across this country. … His impact on the State of Israel will be felt for many generations to come.”

“He knew that as a Jew fighting for human freedom and dignity, it was something worth sacrificing your life for,” says Richard Landes, a retired Boston University history professor now living in Israel. “Honoring pioneers like Smoky is like a long-distance swimmer picking up his head, and seeing where we’ve come from and where we’re heading. It’s a tonic the Jewish people and the world needs now in the face of so much criticism of Israel.”

And, in his 100th year, Simon’s devotion to Israel remains strong. “There are 58 Muslim states and 86 Christian states in the world, and there is going to be one Jewish state—the State of Israel—until the end of time,” he says.

“Israel survived against all the odds, and the part we played? We were in the fortunate position to be in this place at that time,” he adds with his trademark grin. “We were fortunate enough to be able to be the arm of the Almighty.”