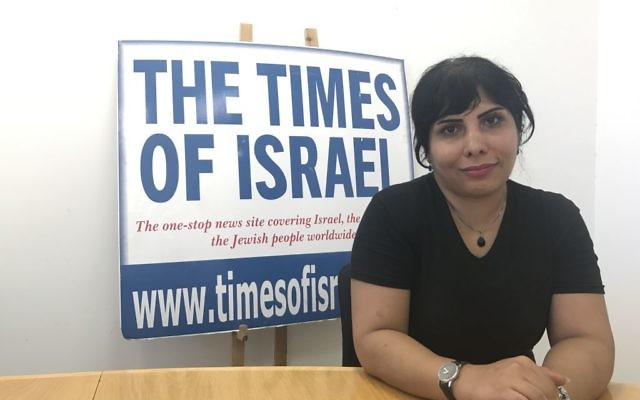 Safe in Jerusalem, Iranian blogger thanks Israel for ‘saving’ her

Hours after she arrived at Ben Gurion Airport on Thursday, Neda Amin, an Iranian-born journalist and dissident who feared being deported to her native country, thanked the Israeli government for granting her refuge, adding that she has Jewish roots and would love to live in Israel.

Having written critically about the regime, Amin feared she would have been arrested, tortured, and that her life would have been in danger had she been forced to return to the Islamic Republic.

“I am very happy. Israel is my country,” she said in broken English, adding that she finally felt “safe now” because no one wants to attack or arrest her here.

Amin, 32, said she had no immediate plans but indicated that she would seek permanent residence status or citizenship.

“In the meantime, I was saved, I was rescued,” she said in Persian, speaking through an interpreter. “If the Israeli authorities will give me permission, I would love to live here, with all my heart and soul. If not, I will respect their decision.”

Amin said her late father’s mother was Jewish and that she always felt sympathetic toward Israel and the Jewish religion.

“My roots are somewhat connected to Judaism. I loved Israel since my youth; I never accepted all the regime’s anti-Israel slogans. I always dreamed that I will somehow get to Israel.”