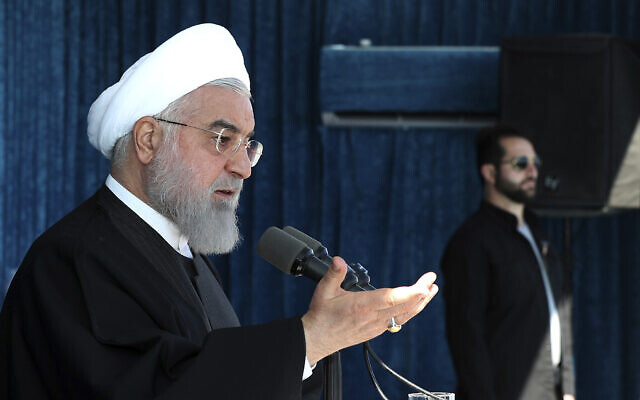 “It is a strategic mistake in the Islamic world when some see Israel as their friend. It is very unfortunate that some Islamic countries, that are supposed to be steadfast against their enemies for the benefit of the world of Islam and the benefit of their own people, have extended a hand in friendship to Israel,” Rouhani said, according to a translation by the Middle East Media Research Institute watchdog group.

“They are even using Israel’s intelligence capabilities against the Muslim people and the resistance movements,” he said.

Israel has peace agreements with Egypt and Jordan, and has seen warming ties with Sunni-Arab Gulf states in recent years, despite the absence of formal diplomatic relations, due to shared concerns about an increasingly belligerent Iran.

Rouhani said that Iran was at the “forefront of the struggle against arrogance and the Zionist regime,” alongside Palestinians, Syrians and Iraqis, and expressed his country’s enmity toward the US.

“We must clear our minds of any doubt that America is our enemy,” Rouhani said, although he said this did not mean that Iran sought war with the US.

Iran’s relationship with the US has unraveled since US President Donald Trump withdrew in May 2018 from the landmark 2015 nuclear deal with international powers. Tehran Iran still allows United Nations inspectors to monitor its nuclear sites and hasn’t pushed its enrichment anywhere near weapons-grade levels of 90 percent.

It has violated the deal, however, by enriching uranium up to 4.5%, beyond the 3.67% allowed by the deal. Iranian officials say their stockpile of low-enriched uranium is over 500 kilograms (1,100 pounds), beyond the accord’s 300-kilogram (661-pound) limit. It also began using advanced centrifuges prohibited by the agreement and resumed enrichment at its underground Fordo facility.

Rouhani in his speech proclaimed Iran’s friendship for Saudi Arabia, despite longstanding tensions between the states, and its bond with Kuwait, the UAE, Bahrain and the Palestinian people.

“Today is not the time for Shia-phobia, Sunni-phobia, Iran-phobia, or any-country-phobia. Our phobia today should be about the arrogance and Zionism,” Rouhani said.