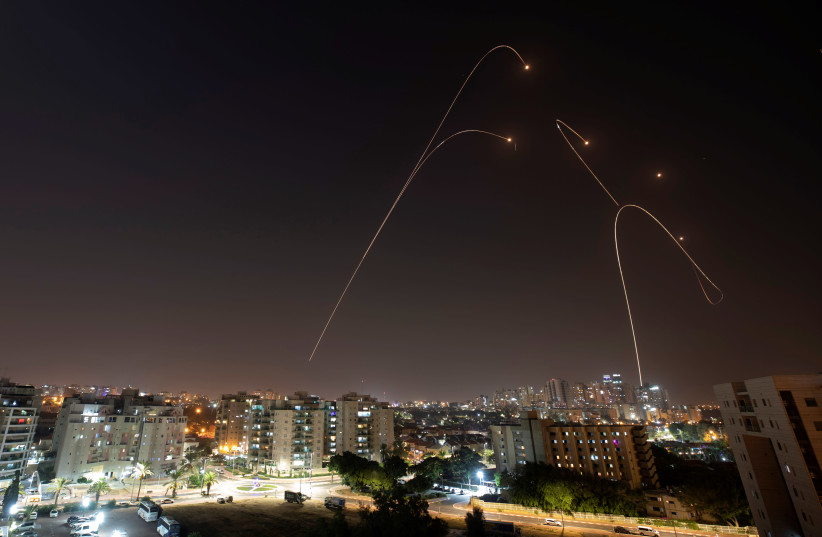 Five rockets were fired towards southern Israel shortly after a ceasefire between Israel and the Palestinian Islamic Jihad went into effect after two days of heavy fighting, the IDF announced on Thursday morning.
According to the military, two of the rockets were intercepted by the Iron Dome missile defense system.

After two days of heavy fighting between Israel and the Palestinian Islamic Jihad, the two sides announced a ceasefire on Thursday morning, which went into affect around 5:30 a.m..
IDF Spokesman Brig.Gen. Hidai Zilberman confirmed that after 50 hours of an operation dubbed “Black Belt,” achieved all of its objectives quickly and fully.
The operation, he said, was characterized by “surgical operations and surprise,” as well as by cooperation between the Air Force, Military Intelligence and the Shin Bet.
“With a combination of military personnel from a variety of units who specialize in SIGINT, HUMINT, we were able to attack cells and close the circle against targets very quickly. That’s what killed 25 terrorists who were in the midst of carrying out hostile activity.
According to Zilberman, the goal of the operation was to focus all strikes against Palestinian Islamic Jihad (PIJ) while leaving Hamas alone, differentiating between the two groups in to enable the continued stabilization of Gaza.

“The purpose of the operation was to improve the security situation in the south by weakening the PIJ and the continued promotion the stabilization process,” Zilberman said. “In this operation, we struck a heavy blow to PIJ’s operational capabilities.”
However, he added, “we used only a little of the IDF capabilities – PIJ is not Hamas, nor Hezbollah nor Iran.”
The IDF Spokesman accused Bahaa Abu al-‘Ata, whose targeted assassination sparked the latest round of fighting, as being the commander of PIJ in the blockaded enclave and being in direct contact with PIJ in Syria in order to carry out attacks against Israeli troops and civilians.

He was assassinated in order to “get an obstacle for stability and different diplomatic arrangements out of the way.”
UN Special Coordinator for the Middle East Peace Process Nickolay Mladenov, who has been in Egypt working to restore calm, tweeted “#Egypt and the #UN worked hard to prevent the most dangerous escalation in and around #Gaza from leading to #war. The coming hours and days will be critical. ALL must show maximum restraint and do their part to prevent bloodshed. The #MiddleEast does not need more wars.”

While a ceasefire went into effect, with the Homefront Command removing all restrictions on residents in the south and center of the country, “the IDF remains on high alert for many scenarios,” Zilberman said, adding that the IDF needs to remain focused on the northern front.

“We are at high readiness and preparedness on all fronts, not only in Gaza. We are facing a significant challenge against Iranian activity in a variety of arenas and not only in Syria.”
According to Zilberman, the threats posed by Iran were taken into consideration for the operation and “we took advantage of the window of opportunity in Gaza.”

Defense Minister Naftali Bennett was present throughout the assessments and discussions with senior IDF officials and the security establishment regarding the operation, including the last few hours ahead of the ceasefire.
“The new rules of the game are clear: the IDF will operate with complete freedom of action, with no restrictions,” Bennett said. “A terrorist who tries to hurt the citizens of Israel will no longer be able to sleep peacefully, neither in his home nor in his bed, nor anywhere in hiding.”

Praising the IDF and the Israeli residents of the south, he urged the public to remain alert and attentive.
“At this point, it’s not over yet. Only the acts in the field will determine the end.”