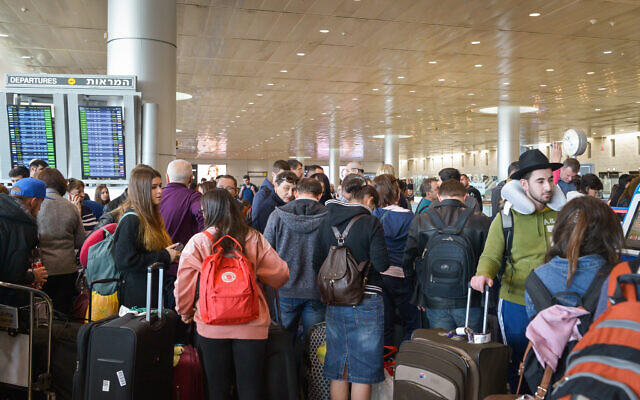 Israel saw a record number of 4.9 million entries into the country last year, of which 4.6 million were tourists who stayed at least one night, according to figures from the Central Bureau of Statistics.

The tourism figures for 2019, published Monday, showed an increase of 12 percent in the number of entries compared to 2018.

Overall, tourist visits rose by 10.5% above numbers for 2018 and were 41% higher than the annual average for the past decade.

There was also a new high for Israelis taking trips abroad with some 9.2 million exits from the country, an increase of 8% over the previous year.

Of the 4.3 million who traveled, 2.2 million made just one trip, and 2.1 million went abroad more than once. The numbers also included expat Israelis who visited their homeland.

Some 2.4 million exits happened in the months of July and August. The highest number of exits on a single day was on September 26 with 50,000.

Global tourism has been on the rise over the past decade, the CBS said, and the trend has also been felt in Israel, which has seen a steady increase in visitors over the past ten years, aside from the years 2014-2016.

The CBS suggested the temporary dip may have been caused by the security situation and in particular the war in Gaza in the summer of 2014.

On average there have been 3.6 million entries into the country every year for the past ten years.