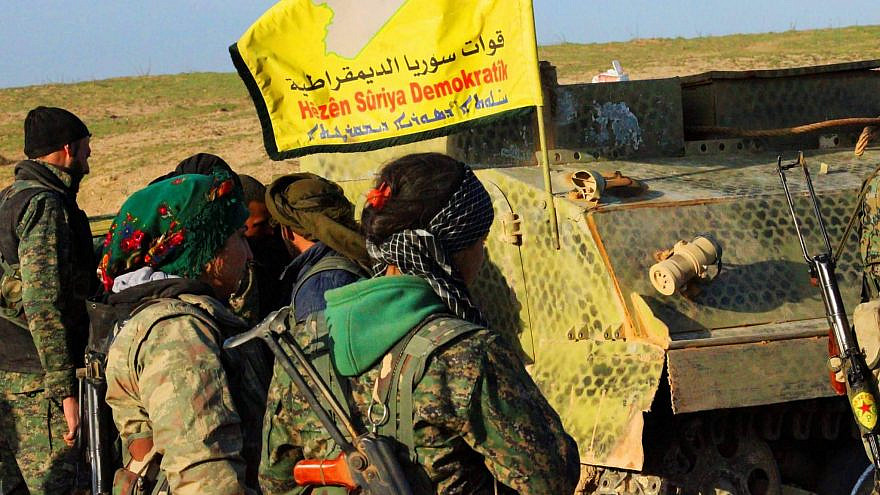 (October 17, 2019 / JNS) The sudden decision of U.S. President Donald Trump last week to withdraw its forces from northern Syria, effectively taking them out of the country and putting them elsewhere in the Mideast, led to an immediate invasion by Turkish forces marked by violence.

Rallies have taken place in Israel and Europe in support of the Kurds, and accusing Turkey and its president, Recep Tayyip Erdoğan, of terrorism.

The volatile Mideast situation has also led to national concern among the pro-Israel and Jewish community, with some saying that the move will have major ramifications for Israel.

On Wednesday, the U.S. House of Representatives condemning the move in a resolution that passed with a vote of 354-60.

On Thursday, U.S. Vice President Mike Pence and U.S. Secretary Mike Pompeo traveled to Turkey to meet with Erdoğan about the situation, which has caused hundreds of thousands of people to be displaced and dozens in what critics have called a betrayal of U.S. allies, including the Kurds and Israel. After a five-hour meeting, Erdoğan agreed to a ceasefire. He was scheduled to continue on to Israel to meet with Prime Minister Benjamin Netanyahu about regional security.

“We have been watching the unfolding events in Syria regarding the Kurdish community with horror and anguish,” said David Harris, CEO of the American Jewish Committee, which is scheduled to hold a solidarity rally in New York on Oct. 18 for the Syrian Kurds.

“Innocent lives are being lost as we speak, while the U.S. government turns its back and the U.N. Security Council is rendered impotent by Turkey’s and Syria’s friends,” continued Harris. “The Kurds have stood up when we needed them most. Now it’s our turn to stand up. History teaches us to be counted—to say, in Hebrew, ‘Hineini,’ or ‘Here I am.’ ”

In fact, Turkish forces are responsible for killing at least 200 civilians and for displacing more than 200,000 people.

B’nai B’rith International CEO Daniel Mariaschin told JNS that he believes Israel will continue to defend itself regardless of Trump’s moves.

“Predating these developments, Israel has been constantly concerned about Iranian and Hezbollah presence in both Syria and Lebanon, and will most certainly continue to act in its own interests in defending its land and its people,” he told JNS.

The Republican Jewish Coalition declined to comment specifically on Trump’s latest move, though RJC executive director Matt Brooks told JNS via email, “I think it is a mistake to try to bring Israel into the debate about the administration’s policy in Syria, even though many are trying to do so. In reality, there is no evidence to suggest that Trump would ever consider backing away from our relationship with Israel.”

“President Trump has a warm spot for Israel in his heart; he knows how vital it is as an important strategic partner of the U.S. and how critical they are in our efforts to ensure Iran never gets a nuclear weapon,” he continued. “There is a reason that President Trump is widely seen here and abroad as the most pro-Israel president in history, and that reason is because he has demonstrated not by word but by action his commitment to Israel and the U.S.-Israel relationship.”

Sarah Stern, founder and president of the Endowment for Middle East Truth (EMET), disagreed with Brooks.

“The withdrawal of American forces from northern Syria constitutes an almost irredeemable black stain on American foreign policy,” she told JNS. “There are over 11,000 graves that are filled with the bodies of Kurds who made the ultimate sacrifice in fighting together with us against ISIS,” and therefore “this constitutes a profound betrayal of our ally and comrade-in arms, the Kurds, making it infinitely more difficult for anyone to trust us and support us in battle for many years to come.”

In terms of the foreign-policy ramifications, she said, “It undoubtedly makes the region and the entire world exponentially more dangerous. It has empowered Erdoğan, who has allied himself with Hamas, as well as empowered the constellation of the Iranian mullahs: [Vladimir] Putin’s Russia and Bashar Assad of Syria.”

“The Kurds, who are valiant fighters, together with the U.S. forces, had constituted a roadblock in the Shi’ite land bridge stretching from Tehran, Baghdad, Damascus and Beirut,” she continued. “Now, this opens up the door for the hegemonic aspirations of the Iranians, together with their patrons Assad and Putin. Turkey and Iran are now at play as to who controls Syria and anything that destabilizes the region makes it that much less safe for Israel.”

Yaakov Menken of the Coalition of Jewish Values told JNS, “I think it remains to be seen. Certainly, the initial reaction is very negative—wanting to avoid endless wars is not a reason to abandon friends and allies to a hateful adversary. But as far as Israel, some argue that the Turks will prevent Iranian weapons from reaching Hezbollah via Syria, which is a good thing.”

“So while it’s terrible for the Kurds in the area Turkey wants to claim [the main Kurdish area is in Iraq], I think it goes too far to say it undermines his pro-Israel stance,” he said.

‘‘One of region’s few stable areas thrown back into chaos’

Some of Trump’s most ardent backers in the evangelical Christian community are expressing their concerns as well. Many have spoken out strongly on behalf of Christian minorities in the Middle East, who have been targeted ISIS and Turkey in the past. In recent history, the Kurds have fought alongside or provided a safe haven for Middle East Christians in Syria and Iraq.

“We cannot sit idly by as a radical Islamist strongman, who backs terrorists like Hamas, engages in the slaughter of our stalwart allies the Kurds,” said CUFI founder and chairman Pastor John Hagee in a statement, referring to Erdoğan. “Nor can we be silent as this totalitarian threatens Middle Eastern Christians.”

“The short-term consequence of the U.S. pullback from Syria will be a humanitarian disaster that pushes the Kurds into the arms of our adversaries,” he continued. “In the long term, an emboldened Turkey will have direct negative consequences for Israel, as well as America’s standing among allies around the world.”

Another Christian pro-Israel group, the Philos Project, said Christians are missing the point in criticizing the withdrawal.

“Trump made a big mistake, but I think some Christian leaders are putting their emphasis on the wrong point,” the organization’s founder and executive director, Robert Nicholson, told JNS.

“I’ve heard several evangelicals lamenting the plight of the Kurds, who have an actual army and long history of fighting the Turkish government, while the real problem with Trump’s sudden exit from Syria is less about the Kurds than about the Christians,” he said. “The Turks and Kurds have a beef that has nothing to do with us, or the Syriac and Assyrian followers of Jesus who are caught between them.”

He continued, “Israel isn’t happy because one of the region’s few stable areas is now thrown back into chaos. Americans should be bothered by that, but they should be even more bothered that their president handed over a Christian safe zone to Turkey—the country that has killed more Christians in the last century than any other in the Middle East.”

“The humanitarian crisis triggered by President Trump’s sudden withdrawal of U.S. troops from the Turkish-Syrian border is senseless, painful, and must end,” said RAC director Rabbi Jonah Pesner. “For years, the Kurdish people in the region have worked closely with U.S. forces to oppose ISIS. Now their suffering has captured the world’s attention as they are subjected to a Turkish military assault that violates basic human rights and dignity, and threatens to further destabilize a region already ravaged by violence. The United States’ complicity in this loss of life and devastation is shameful.”

“The Jewish people know the peril of being abandoned by the international community,” he continued. “And the ancient words of Leviticus demand that we not stand idly by as our neighbor bleeds. We will not be silent as the administration forsakes the lives of hundreds of thousands of innocent civilians.”