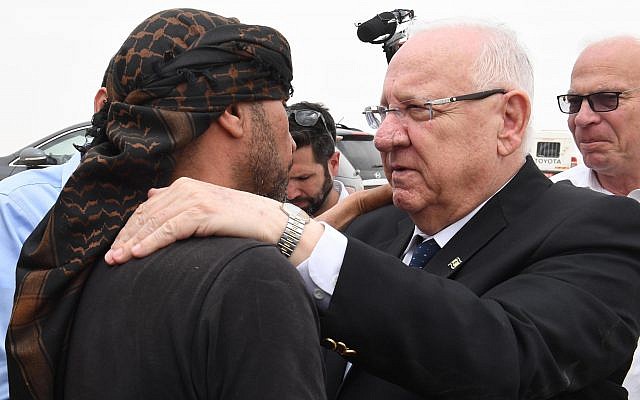 The three were Moshe Agadi, 58, killed when a rocket hit his home in the southern city of Ashkelon early Sunday morning; Ziad al-Hamamda, 47, killed in a separate rocket attack on a factory in the same city; and Pinchas Menachem Prezuazman, 21, fatally struck by shrapnel while running for cover in the city of Ashdod on Sunday evening.

The fourth Israeli fatality in the two-day eruption of violence was Moshe Feder, 68, killed when an anti-tank missile fired from Gaza struck his car near Kibbutz Erez.

Feder was to be buried on Monday evening.

In a statement, Rivlin acknowledged the diverse backgrounds of the victims — Bedouin Muslim, ultra-Orthodox, secular, religious — in an appeal for national unity.

“We, the tribes of Israel, are together in good times and bad, in hope and in difficulty, regardless of which tribe we are from. Ultra-Orthodox, secular, religious and traditional, Jews and Arabs – terror strikes us all without discrimination and without mercy, and we will never surrender to it. We are together in celebration and in consolation and I pray with all my might that you will know no more sorrow,” he said at the Segev Shalom home of al-Hamamda in the Negev.