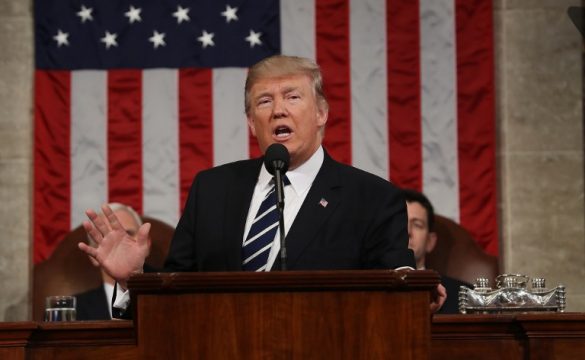 US President Donald J. Trump delivers his first address to a joint session of Congress from the floor of the House of Representatives in Washington, DC, USA, 28 February 2017. / AFP PHOTO / POOL / JIM LO SCALZO

WASHINGTON — In a noteworthy move, President Donald Trump opened his highly anticipated address to a joint session of Congress Tuesday night by speaking out against the recent wave of anti-Semitic attacks across the country

Noting his Feb. 28 speech came at the end of Black History Month, Trump said the recurrent surges of bomb threats to Jewish institution and desecration of Jewish cemeteries were a reminder “of our nation’s path toward civil rights and the work that remains.”

“Recent threats targeting Jewish community centers and vandalism of Jewish cemeteries, as well as last week’s shooting in Kansas City, remind us that while we may be a nation divided on policies, we are a country that stands united in condemning hate and evil in all its forms,” he said.

In just the last week, hundreds of Jewish tombstones in Pennsylvania and Missouri were vandalized and numerous Jewish institutions received bomb threats, including 29 on Monday alone — the fifth wave of such scares since January.