Postcard discovered of David Ben-Gurion writing, ‘State of Israel has been born!’ 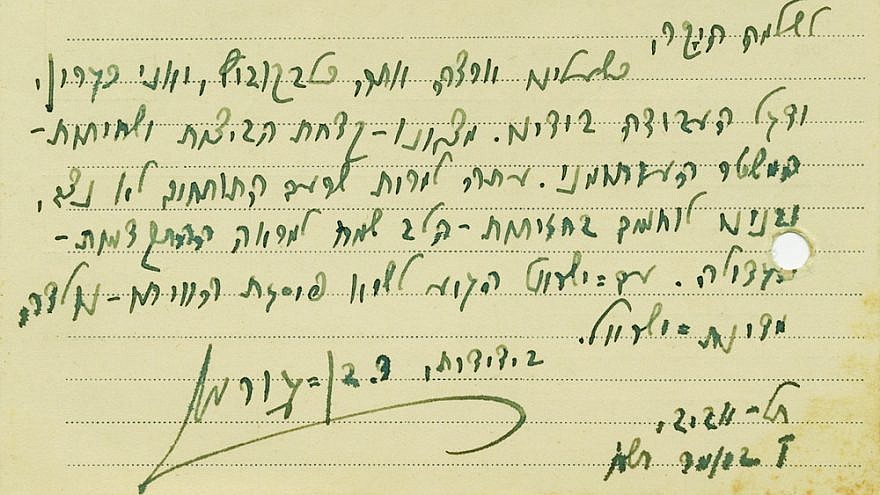 A postcard written and signed by Israel’s first prime minister, David Ben-Gurion, just one day after officially declaring the State of Israel’s independence, was recently discovered. Dated on the sixth day of the Hebrew month of Iyar in the Jewish year 5748 (May 15, 1948), it was sent to the founding father of the kibbutz movement, Shlomo Lavi.

In a letter inscribed on the back of the postcard, Ben-Gurion wrote: “The people of Israel have attained the pinnacle of their existence—the State of Israel has been born.”

The postcard, which was discovered right before Israel’s Independence Day, will be put up for public auction next week at the Kedem Auction House in Jerusalem.

In the letter, Ben-Gurion compares the contrasting realities on the ground between the time he immigrated and the day after the establishment of the State of Israel.

“When we arrived in this Land, you as Lefkowitz and I as Grün, waving the flag of Labor, we encountered the malaria of the swamps and the corruption of the Ottoman regime. Now, despite the fact that the roar of the cannons has not ceased and our sons are fighting on all fronts, my heart is joyous upon witnessing this great advancement.”