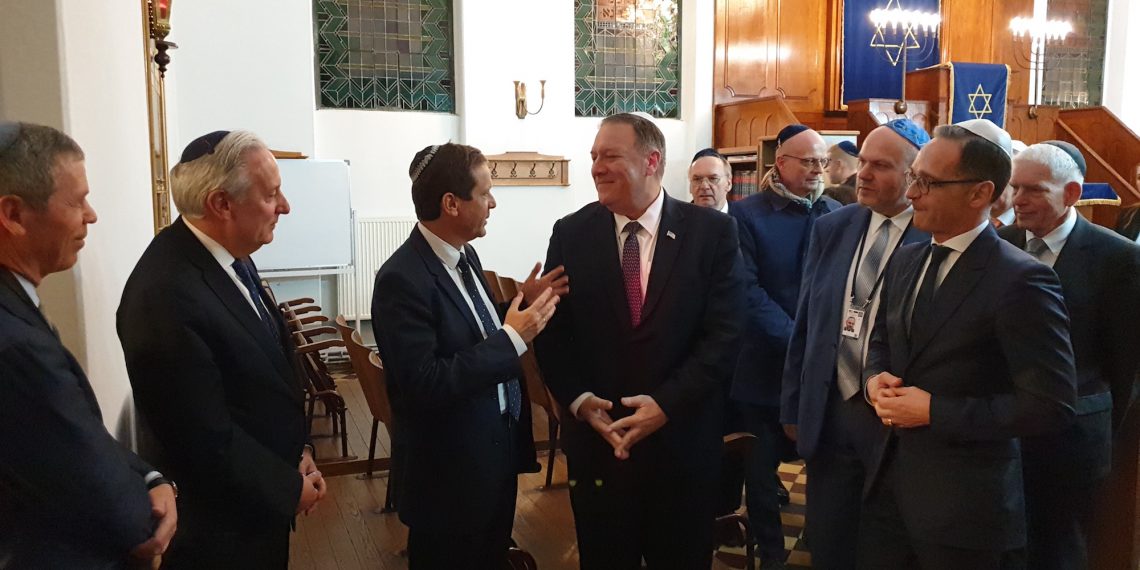 Pompeo: We will stamp out anti-Semitism wherever we find it

The Jewish World was rocked to its core last month when a gunman killed two people at a synagogue in Halle, Germany on Yom Kippur. On Thursday, Jewish Agency Chairman Isaac Herzog, US Secretary of State Mike Pompeo and German Foreign Minister Heiko Maas participated in a memorial service at the synagogue to pay tribute to the victims.

Herzog took the occasion to call out the rampant anti-Semitism spreading across Europe.

“There is no question as to the rampant rise of anti-Semitism across Europe. It’s truly a miracle that the Jews of Halle didn’t suffer a massacre on Yom Kippur. Global leaders must unite in a relentless fight against anti-Semitism – by protecting Jewish institutions, and most importantly, by means of education and firm legislation against hate crimes,” he said.

Similarly, US Secretary of State Mike Pompeo, spoke about the Trump Administration’s efforts to eradicate Jew-hatred.

“Our whole team has made a major focus on stamping out anti-Semitism wherever we find it. It’s an honor for me to come here alongside you and share America’s sympathy for what took place here and to remind the world that anti-Semitism is not just limited to certain places. We can find it everywhere… like in Pittsburgh. We must work together against this vicious attack on religious freedom,” he said.

Halle is home to a few hundred Jews. The synagogue in question actually used to be a Jewish funeral home, but was converted to a house of worship in 1948, replacing Halle’s original synagogue that was burned on Kristallnacht, 81 years ago this week.

Kristallnacht, the massive pogrom carried out against the Jews on the night between November 9th and 10th in 1938, killed hundreds of Jews and destroyed thousands of synagogues, Jewish businesses and homes.

“This Shabbat marks 81 years since Kristallnacht. It is inconceivable that today Jews need to remove their kippah [skullcap] in order to walk the streets of Europe,” Herzog said.