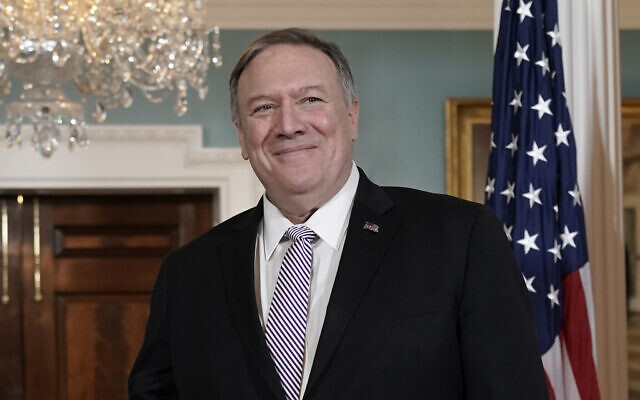 US Secretary of State Mike Pompeo on Monday called on Arab states to end their boycott of Israel and instead engage with the Jewish state.

Pompeo included a link to a New York Times article about a gathering last week in London of representatives of Arab civil society from 15 countries who similarly called for the end of Israel’s isolation in the Arab world.

Calling itself the Arab Council for Regional Integration, the newly established forum’s members have repudiated the Boycott, Divestment, and Sanctions movement against the Jewish state, asserting that efforts to prevent normalization between their respective nations and Israel has caused more harm than good, and has been particularly bad for the Palestinians.

While the movement’s members admit to being marginal within their own societies, with only two politicians (one current and one former) attending, they expressed hope that their position would eventually influence the thinking of their contemporaries.

Pompeo’s call for normalization came after last week he strained relations between Israel and the Arab world by announcing that, after legal consultations, the US had concluded the establishment of Israeli settlements in the West Bank was “not, per se, inconsistent with international law.”

The Cairo-based Arab League, a regional organization with 22 member states, met Monday to discuss the change in US policy. League Secretary General Ahmed Aboul Gheit called the decision “unfairly biased and unacceptable,” and said the US has forfeited its role as a neutral arbiter between Israel and the Palestinians.

While there has been an increasingly openness to engagement with Israel in some quarters of the Arab world, there has also been a hardening of attitudes in others.

In March, United Arab Emirates Minister of State for Foreign Affairs Anwar Gargash called for a “strategic shift” in Israel-Arab ties, saying that Arab world’s decades-old decision to boycott the Jewish state had been a mistake and arguing that Arab boycott has complicated efforts to find a solution to the Israeli-Palestinian conflict. In June Bahrain’s Foreign Minister Khalid bin Ahmed al Khalifa said his country recognizes Israel’s right to exist, knows that it is “there to stay,” and wants peace with it.

But earlier this year, Tunisia’s newly elected President Kais Saied called moves toward relations with the Jewish state “high treason.” And ties with Jordan, which signed a peace deal with Israel in 1994, have also become strained in recent years, with the kingdom’s first envoy to Israel recently stating that the accord should be reexamined because Jerusalem could be planning a mass expulsion of millions of Palestinians.