Pompeo to visit Israel Thursday for talks on Syria — report 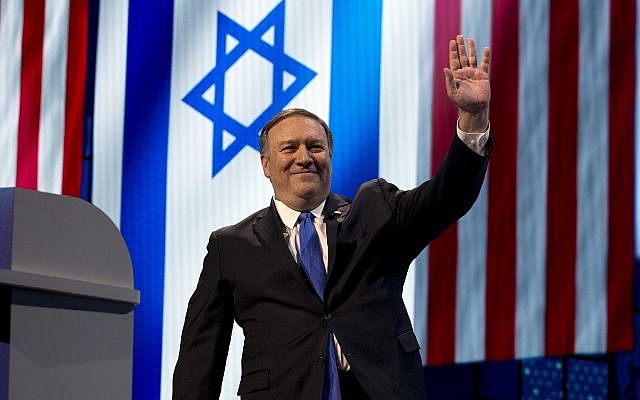 US Secretary of State Mike Pompeo will reportedly visit Israel Thursday for talks on Syria following the pullout of American soldiers and Turkey’s launching of a military offensive against Kurdish fighters.

According to Channel 13 news, Pompeo will travel to Israel after visiting Turkey with Vice President Mike Pence. The report, which quoted Israeli officials, said Pompeo will meet Prime Minister Benjamin Netanyahu to update him on US policy in Syria.

There was no immediate confirmation of the visit from the US Embassy in Israel or other officials.

US President Donald Trump last week announced the immediate pullout of American forces from northeastern Syria, clearing the way for Turkey’s subsequent incursion into the area.

Israeli officials, among them Netanyahu, have condemned Turkey’s military operation and voiced support for the Kurds, but have not criticized Trump’s decision to withdraw US troops.

The US pullout has raised concerns of a reemergence of the Islamic State jihadist group, which US-backed Kurdish fighters fought and retook areas of Syria from, as well as the expansion of Syrian regime backers’ Russia and Iran’s influence in the country.

Israel has warned against Iranian efforts to establish a military presence in Syria that could be used to attack the Jewish state and carried out hundreds of airstrikes there in recent years on Iran-linked targets.

Republican Senator Lindsey Graham of South Carolina, an ally of Trump, has said the pullout could “ensure Iran’s domination of Syria” and “become a nightmare for Israel,” a sentiment echoed at Tuesday’s Democratic presidential debate by Senator Amy Klobuchar of Minnesota.

Despite international condemnation over the offensive, Turkish President Recep Tayyip Erdogan has remained defiant and said the operation won’t cease until the Kurdish fighters give up their arms.