Pompeo to ‘Post’: Israel has right to act in Syria, U.S. will stop Iran 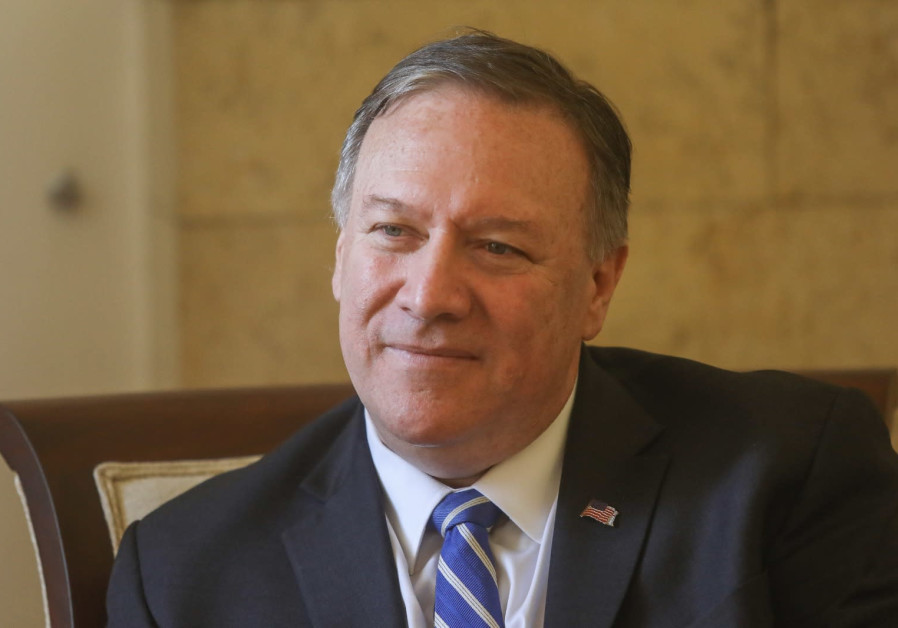 Despite the withdrawal of US troops from Syria, Israel retains operational freedom to defend itself, and America remains committed to closely watching the Iraqi-Syrian border to help prevent the transfer of Iranian arms into the country, Secretary of State Mike Pompeo told The Jerusalem Post on Friday in an exclusive interview.

“Our administration’s been very clear,” he said. “Israel has the fundamental right to engage in activity that ensures the security of its people. It’s at the very core of what nationstates not only have the right to do, but an obligation to do.”

Regarding the Iraqi-Syrian border, which Israeli intelligence believes is used by Iran to smuggle weapons into Syria and Hezbollah, Pompeo said that American forces would continue to watch the area closely.

“The president has committed to continuing that activity that the US has been engaged in now for a couple of years, and is aimed at countering ISIS and providing us situational awareness in the region,” he said.

“We know this is a corner where Iran has attempted to move weapon systems across into Syria, into Lebanon, that threatens Israel, and we are going to do everything we can to make sure we have the capacity to identify those so that we can, collectively, respond appropriately.”

Pompeo spoke to the Post in Jerusalem shortly after a two-hour meeting on Friday morning with Prime Minister Benjamin Netanyahu and Mossad chief Yossi Cohen. He was accompanied to the meeting by US Ambassador to Israel David Friedman, and James Jeffrey, US special envoy on Syria.

Pompeo arrived in Israel a day after meeting Turkish President Recep Tayyip Erdogan, who agreed to a five-day ceasefire to allow Kurdish forces to evacuate the border region. Israeli politicians and defense officials have raised concerns that the US pullout from Syria will strengthen Iran.

Pompeo dismissed that possibility, saying that the administration remained committed – like it has been – to stopping Iran and preventing it from obtaining nuclear weapons. He said that all options were on the table in the event that Iran broke out toward a bomb.

“I think the Israeli people should stare at the probably starkest change this administration has made in foreign policy vis-a-vis what the previous administration has done – the toughest sanctions we’ve ever put,” he said. “Sanctions that will be sufficient to decrease the scope and size of the Iranian economy by over 12% this next year. That’s serious stuff. We do this because this denies resources from Iran to do assassination campaigns in Europe, missile systems and infrastructure technology advancement, underwriting Hezbollah, Shia militias around the word. We have materially reduced their capacity to engage in those behaviors.”

No one, he said, should interpret the withdrawal of US troops from Syria as a sign that America is no longer committed to its strategy to stop Iranian aggression and efforts to obtain a nuclear capability.

“If you look at our strategy, America is committed to countering the threat from Iran,” he said. “We view it as the fundamental destabilizing force inside the Middle East, and we are determined to push back against that.”

He dismissed criticism of the deal with Turkey – which he said would “save lives” – and said that Israel has nothing to worry about, that America would stand by the Jewish state in the event of future conflicts.

“There is no risk of that,” Pompeo said. “There are decades of history that would support my statement, and I know that there are two and a half, and almost three, years of this administration that would support that statement as well… This relationship is strong, deep and growing, and in a position that reflects the historically important ties between our two countries for all the reasons we know: the value sets we share, and the common security interests and burden that we both jointly share.”

He pointed to Trump’s decision two weeks ago to send additional US troops to Saudi Arabia in the wake of the recent Iranian drone and missile attack against a Saudi oil refinery. “We will flow additional forces and resources into the kingdom of Saudi Arabia in a very significant way in the next handful of weeks, aimed at deterring Iranian aggression,” he said.

“We have made significant commitments to counter the threat, not only the threat to Israel but to the Middle East and the world that emanates from the ayatollah and his fellow clerics and kleptocrats that are running that revolutionary regime.” Pompeo said that he takes Iranian threats seriously, and that there is a chance that the Islamic regime will try to attack Israel in a similar way to the recent attack against the Saudis.

“I always take the Iranians at their word,” he said. “They have said that they would like to wipe Israel off the face of the earth, and I think it is reasonable to think that the Iranians would contemplate an attack on Israel… We should not suggest that this is mere bluster or threat, but they are engaged in activity that creates risk certainly for Israel, but we have seen what they did in Saudi Arabia and we’ve seen what they are doing today in Yemen, and we watch the activities they are engaged in Syria and the Shia militias in Iraq. This is a serious threat.”