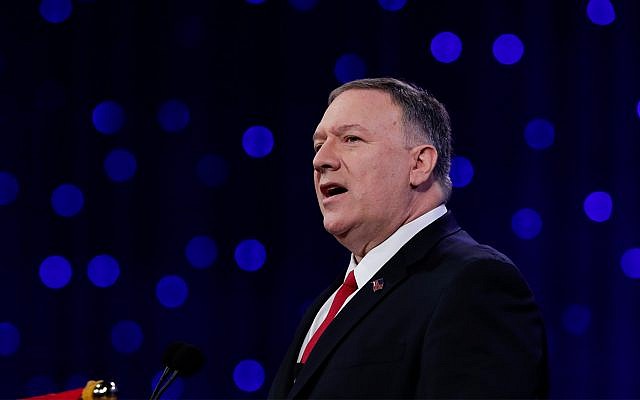 US Secretary of State Mike Pompeo on Wednesday said the Iranian attack on a Saudi oil field, which halved the kingdom’s output and sent energy prices skyrocketing, could be considered an “act of war.”

Speaking with reporters just before his plane touched down in Saudi Arabia, where he is set to meet with Crown Prince Mohammed bin Salman to discuss how to “coordinate efforts to counter Iranian aggression in the region,” Pompeo said that “we were blessed there were no Americans killed in this attack, but anytime you have an act of war of this nature, there’s always a risk that could happen.”

Washington has blamed Iran for the incident, asserting that it fired dozens of cruise missiles and drones in the attack on the heart of the kingdom’s oil industry. On Sunday, senior US officials said that satellite imagery and other intelligence showed the strike was inconsistent with one launched from Yemen, where Iranian-backed Houthi rebels had claimed responsibility.

Iran has called earlier US claims that Tehran was responsible “maximum lies,” while a commander in its paramilitary Revolutionary Guard reiterated its forces could strike US military bases across the Mideast with their arsenal of ballistic missiles.

Eighteen drones and seven cruise missiles were launched in the assault with three missiles failing to make their targets, Saudi military spokesman Col. Turki al-Malki said in a news conference on Wednesday. He said the cruise missiles had a range of 700 kilometers (435 miles), meaning they could not have been fired from inside Yemen. He played surveillance video he said showed a drone coming in from the north. Satellite images released earlier by the US showed damage largely on the north-facing sides of structures at the sites.

“This is the kind of weapon the Iranian regime and the Iranian IRGC are using against the civilian object and facilities infrastructure,” he said, using an acronym for Iran’s paramilitary Revolutionary Guard.

As Pompeo was on the way to Saudi Arabia, US President Donald Trump said he’d “prefer not” to meet with Iranian President Hassan Rouhani at next week’s UN session but “I never rule anything out.”

The Trump administration was moving cautiously as it navigated competing impulses — seeking to keep up a pressure campaign aimed at forcing Tehran to negotiate on broader issues with the US while deterring any further Iranian attacks and avoiding another Middle East war.

Echoing Trump’s warning from earlier in the week, Vice President Mike Pence said American forces were “locked and loaded” for war if needed. But he also noted that Trump said he doesn’t want war with Iran or anyone else.

“As the president said yesterday, it’s ‘certainly looking like’ Iran was behind these attacks,” Pence said. “And our intelligence community at this very hour is working diligently to review the evidence.”

Iran-US relations hit a new low last year after Trump pulled out of a 2015 nuclear deal and reimposed unilateral sanctions that had been lifted in exchange for Tehran scaling back its nuclear program.

Earlier Wednesday, Trump announced what he said would be substantial new sanctions against Iran in the first response to the attack on Saudi oil facilities.

“I have just instructed the Secretary of the Treasury to substantially increase Sanctions on the country of Iran!” Trump said in a tweet.

There were no immediate details on what the new measures might be.