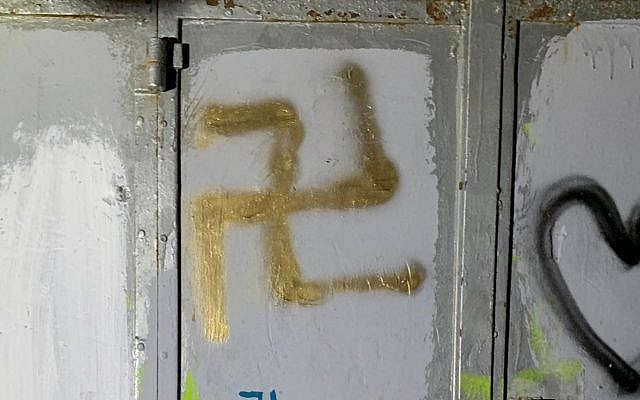 Two minors were arrested on Monday for spray-painting swastikas and other graffiti on the walls of a street in Jerusalem’s Old City, the Israel Police said.

The 16-year-olds are under investigation for suspected property damage and committing a crime with a racial motive and will be brought for a hearing at the Jerusalem Magistrate’s Court on Tuesday, the police said in a statement.

There was no immediate information on their suspected motive.

In a separate vandalism incident on Monday, a human rights group reported a possible hate attack in the northern West Bank Palestinian village of Yatma.

Yesh Din said that residents woke to find “Jews will not be silent” spray-painted on a building at the entrance to the village on Monday. Stars of David were also spray-painted on a number of cars that had their tires slashed, according to the group.

Last week, Mako reported that a similar incident in the town of Yatta, near Hebron, in which cars were vandalized and graffiti reading “revenge” and “Jews will not be silent” was found scrawled on walls.

That incident came shortly after yeshiva student Dvir Sorek was found stabbed to death in the Gush Etzion area of the West Bank.

Channel 12 reported last month that the number of such attacks targeting Palestinians in the West Bank rose dramatically in 2018.