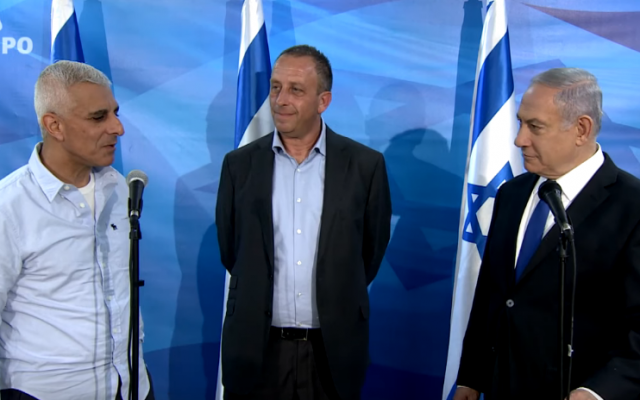 Prime Minister Benjamin Netanyahu on Wednesday met with Intel’s Israeli leadership and saluted the company’s decision to expand its operations in Israel, building a new plant in Kiryat Gat that is expected to include an $11 billion investment.

Netanyahu welcomed the move, which he said would contribute to Israel’s economic growth. “Israel has become a technological world power,” he said. “I am proud that the government is leading this policy.”

Daniel Benatar, manager of the company’s manufacturing plant in Kiryat Gat, thanked Netanyahu for the government’s support. “Together were are making history in the country,” he said.

Benatar said Tuesday that the plan shows the tech firm “continues to demonstrate the strong performance of Intel Israel and we continue to lead in terms of corporate economic and social investment in Israel.”

The tech giant said it would not comment on the schedules, costs and technologies of the project.

Finance Minister Moshe Kahlon said late Monday he was informed by Intel of its decision “to invest another 40 billion shekels (almost $11 billion), an unprecedented decision expected to bring thousands of jobs to the south.”

A Globes report earlier Monday said the deal was contingent on the US tech mammoth receiving hefty help from the state with a grant worth 10 percent of the investment.

In May of last year, Intel confirmed plans to invest $5 billion (NIS 19 billion) in expanding its Kiryat Gat production plant in Israel, where it produces and develops some of its most advanced computer chips, through 2020. As part of the investment plan, Intel is expected to get a NIS 700 million government grant.

The company already pays a reduced 5% tax rate, which it would not seek to change under the arrangement, according to the report.