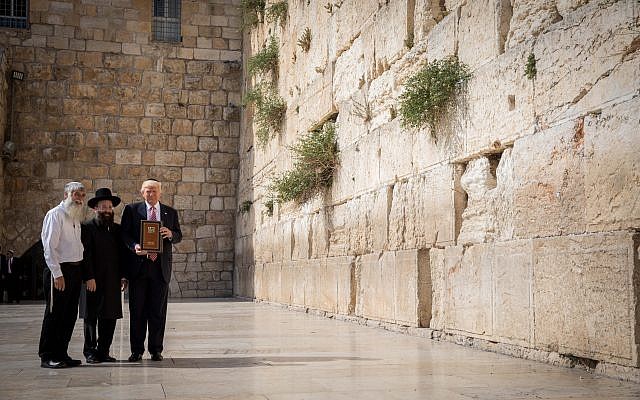 A train station that will be built next to the Western Wall will be named after US President Donald Trump.

The decision was made by Transportation Minister Israel Katz, who said: “The Western Wall is the holiest place for the Jewish people, and I decided to name the train station that leads to it after president Trump – following his historic and brave decision to recognize Jerusalem as the capital of the State of Israel.”

Yediot Aharonot reported on Tuesday that Katz approved the construction plans for the train, that will include a 3 km. tunnel from the Umma (nation) station at the entrance to the city to the Cardo in the Jewish Quarter.

Katz said that he sees the project of extending the length of the railway from Tel Aviv to Jerusalem as the most important national project, and ordered officials in the Transportation Ministry to define it as a top priority mission.

Transportation Ministry Spokesman Avner Ovadia told The Jerusalem Post that without any delays or problems, this project could be finished in five years.

“This project is now awaiting a discussion in the National Infrastructures Planning Committee. When it is discussed there, it means that it receives priority in its advancement and in carrying out the project,” he said.

“It passed a preliminary approval, and now it will be further discussed – and this phase takes around a year. After that, carrying out the project will take around four to five years, if no problems occur,” he added.

The high-speed Tel Aviv-Jerusalem railway has been under construction since 2001 and will complement the existing, slower railway that already operates between the two cities. The project has been marked by numerous setbacks and delays.

In May, Trump became the first sitting US president to visit the Western Wall when he visited the site during a tour of several Middle Eastern countries.