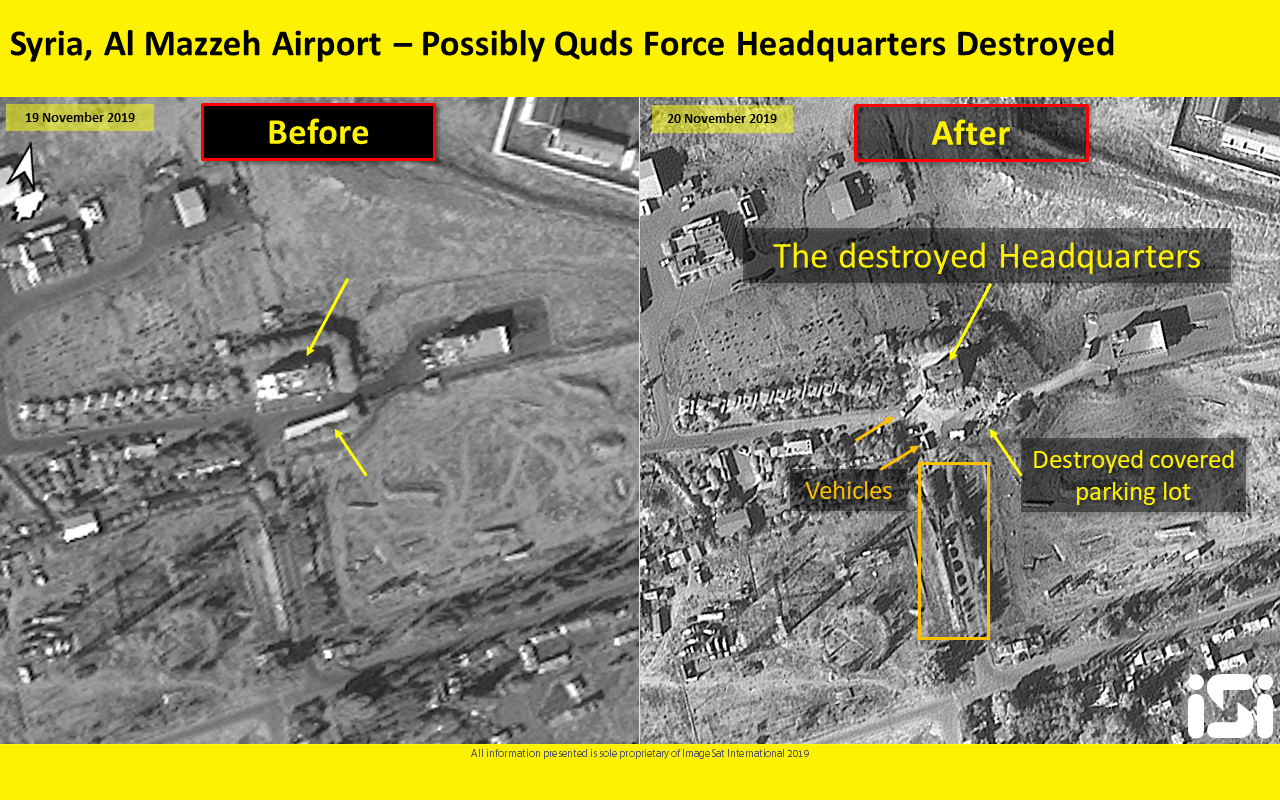 Satellite images released Wednesday night show the destruction of two suspected Iranian headquarters around Damascus that were hit in Israeli airstrikes earlier in the day in response to a rocket attack on northern Israel on Tuesday.

The photographs, distributed by the private Israeli intelligence firm ImageSat International, show two buildings that are believed to have been home to Iran’s Islamic Revolutionary Guard Corps’ Quds Force. One was located in Damascus’s international airport, the other was nearby at the al-Mazzeh airport just outside the capital.

According to a Syrian war monitor, at least 23 combatants were killed in Israel’s predawn airstrikes in Syria Wednesday, 16 of them likely Iranians.

The extensive strikes, which targeted both Iranian and Syrian facilities, were in response to an attack early Tuesday morning in which four rockets were fired at the Golan Heights and northern Galilee regions. The Iron Dome missile defense system intercepted all four incoming projectiles, the Israel Defense Forces said.

In the reprisal raids in the predawn hours of Wednesday morning, the top two floors of the building at the Damascus airport — referred to by ImageSat as the Glasshouse — were destroyed.

According to the satellite imagery analysis company, this building was believed to have been used as a headquarters by the Quds Force’s intelligence unit.

“Currently the site looks abandoned, without any sign of activity,” the company said.

A senior Israeli defense official said the military believed that there were Iranians inside the building at the time of the strike.

“We struck a building staffed by Iranians at the Damascus airport. We assess that there are Iranians killed and injured,” the official said Wednesday, on condition of anonymity.

The second Quds Force headquarters at the al-Mazzeh airport was almost completely demolished in the strike.

A photograph of the site taken Tuesday shows two large rectangular buildings across from the one another. The image captured Wednesday after the strike shows one building completely leveled, while the other is mostly knocked down.

A long line of vehicles could also be seen around the site, apparently being used by search and rescue workers.

In addition to these two buildings, the IDF said it targeted dozens of other sites connected to the Quds Force on Syrian military bases. When Syrian air defenses fired on Israeli jets, the IDF also targeted those batteries, the military said.

Israel has repeatedly warned Syrian dictator Bashar Assad to not intervene during IDF strikes on Iranian targets in his country or else his military will also be targeted, as was the case Wednesday.

According to the Observatory, 23 people were killed in the strikes, and 16 of them were foreigners. Though presumed to be Iranian, that could not be immediately confirmed by the group.

SANA said the two civilians were killed by shrapnel when an Israeli missile hit a house in the town of Saasaa, southwest of Damascus. It said several others were wounded, including a girl in a residential building in Qudsaya, also west of the Syrian capital.

It claimed that Syrian air defenses destroyed most of the Israeli missiles before they reached their targets.

Video footage from Syria appeared to show a Syrian air defense missile crashing to the ground in a heavily populated area shortly after launching, which may account for some of the casualties.

Russia on Wednesday condemned Israel for the strikes. Moscow backs the Assad government and has criticized previous Israeli strikes in the country, especially those that target Syrian military bases in addition to Iranian facilities.

Russian Deputy Foreign Minister Mikhail Bogdanov said the strikes were a “wrong move” that is in “stark contrast” to international law, Interfax reported.

He added that Moscow had reached out to its allies regarding the incident, the report said. However, the IDF said it had coordinated its airstrikes with Russia.

Following its reprisal raids, the Israeli military said it was readying for a potential Iranian retaliation.

“We are preparing for defense and attack, and we will respond to any attempt to retaliate,” IDF Spokesperson Hidai Zilberman told reporters first thing Wednesday morning.

Israel has repeatedly said that it will not accept Iranian military entrenchment in Syria and that it will retaliate for any attack on the Jewish state from Syria.

Israel has carried out hundreds of airstrikes in Syria against Iranian targets over the last several years, but does not generally comment on specific attacks. Iran has forces based in Syria, Israel’s northern neighbor, and supports Hezbollah and Gaza terrorists.

“Our message to the leaders of Iranian is simple: You are not immune anymore. Wherever you send your octopus arms — we will hack them off,” said newly installed Defense Minister Naftali Bennett.

Prime Minister Benjamin Netanyahu said of the strike: “I have made clear that any who attack us, we will attack them. That is what we did tonight toward military targets of the Iranian Quds Force and Syrian military targets.”

The Quds Force, led by Maj. Gen. Qassem Soleimani, is a part of the Islamic Republic Revolutionary Guards Corps responsible for extraterritorial operations, and is a key actor in Syria — both against rebels and in Tehran’s efforts to entrench itself along Israel’s border and threaten the Jewish state from there.