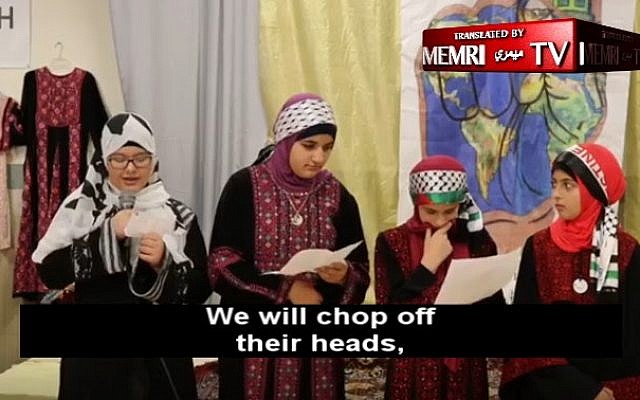 Declaring “the mistake is ours to own,” Muslim leaders in Philadelphia apologized Wednesday for an event last month at which children were captured on video speaking in Arabic about beheadings and the liberation of Jerusalem’s most sensitive holy site.

The Muslim American Society’s Philadelphia chapter and the Leaders Academy, a gathering place for cyberschooled children that rents space at the site, issued a joint statement Wednesday that sought to explain how the questionable material found its way into an annual event meant to celebrate diversity in Muslim communities.

A video uploaded to the chapter’s Facebook page showed children dancing to a revolutionary anthem often used by Islamist groups, and two young girls reading from a prepared text. One said, “We will chop off their heads, and we will liberate the … Al-Aqsa Mosque.”

The contested site, revered by Jews as the Temple Mount and by Muslims as the Noble Sanctuary, is at the heart of the Israeli-Palestinian conflict. The compound is the third-holiest site in Islam and the holiest site for Jews. It has been a flashpoint of violence in the past.

The Facebook video, which has since been taken down, sparked outrage and an ongoing investigation by the Philadelphia Commission on Human Relations.