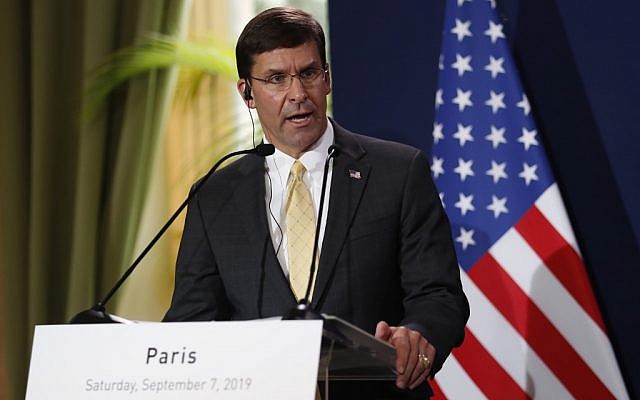 WASHINGTON — United States Defense Secretary Mike Esper said Monday that the US military is preparing a response to the attack on major Saudi Arabia oil facilities.

After briefing US President Donald Trump in the White House, Esper singled out Iran as undermining international order, without directly pinning blame on Tehran for the attack.

“The United States military, with our interagency team, is working with our partners to address this unprecedented attack and defend the international rules-based order that is being undermined by Iran,” he said in a tweet.

Esper said he and the Pentagon leadership met with Trump in the wake of Saturday’s attack, which analysts say appears to have involved drones and possibly cruise missiles launched from a nearby country.

There was, however, no suggestion of what kind of response Washington or its Gulf allies were considering.

The Iran-supported Houthi rebels in Yemen claimed responsibility for the attack.

But the Riyadh-led coalition fighting the Houthis said earlier Monday that the weapons were Iranian-made, and it remains unclear where they were launched from.