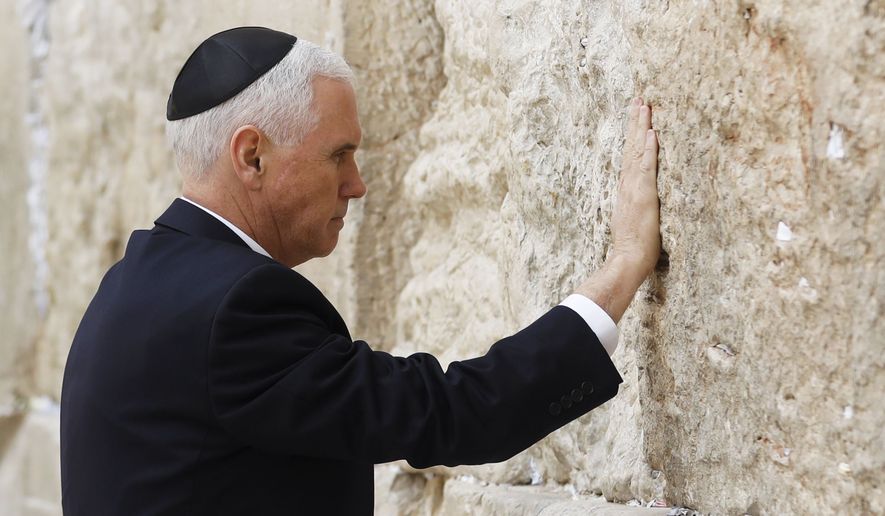 US Vice President Mike Pence visited the Western Wall in Jerusalem on Tuesday, wrapping up a two-day visit to Israel, amid an escalating dispute with the Palestinians over the status of the city.

Pence, whose visit to the Western Wall lasted all of 10 minutes, read a short prayer from the Book of Psalms, placed a note in the Wall, and lay his hand upon the ancient stones. He then signed the Wall’s guestbook before heading out.

“It is my great honor to pray here at this sacred place. God bless the Jewish people and God bless the State of Israel always,” he wrote.

The site — the holiest place where Jews can pray — is in the Old City, annexed by Israel after the 1967 Six Day War, but considered by most of the international community to be occupied Palestinian territory

Pence was met by Rabbi Shmuel Rabinovitch, the rabbi of the site, who told him of a visit to the Wall 147 years ago by Abraham Lincoln’s secretary of state, William H. Seward, who praised the “exalted” prayer he witnessed there.

“The light of Jerusalem is a light of love, of care for the world, of peace,” said  Rabinovitch. “For 2,000 years Jerusalem was tossed from hand to hand, and only now, when it has been returned to its people, can worshipers of all peoples and all faiths come to Western Wall and pray there.”

In May, Donald Trump became the first sitting US president to visit the Western Wall, though he painstakingly avoided referring to it as part of Israel. On December 6, when he officially recognized Jerusalem as Israel’s capital, he avoided stating which parts of the city he was referring to.

“We are not taking a position on any final status issues, including the specific boundaries of the Israeli sovereignty in Jerusalem, or the resolution of contested borders. Those questions are up to the parties involved,” he declared.

A week and a half later, a senior administration official said that the White House “cannot envision any situation under which the Western Wall would not be part of Israel.” However, he added, the “specific boundaries of sovereignty of Israel are going to be part of the final status agreement.”

After the Western Wall visit, Pence was scheduled to hold a reception for Israel-based US diplomats at the US Consulate in Jerusalem, before heading back to Washington.

Pence arrived at Ben Gurion Airport on Sunday afternoon, as part of a wider tour of Middle Eastern countries, amid simmering Palestinian anger at Trump’s December declaration on Jerusalem.

Welcomed by Prime Minister Benjamin Netanyahu and Israeli leaders across most of the political spectrum, Trump’s recognition infuriated the Palestinians, who seek the Israeli-annexed eastern sectors of the city as a future capital. They accused the US of siding with Israel, and Palestinian Authority President Mahmoud Abbas said the move disqualified Washington from acting as a mediator in the Israeli-Palestinian peace process.

After Trump’s announcement on Jerusalem, Abbas said he would not meet with administration officials and called off a meeting with Pence that had been scheduled for mid-December. Pence subsequently postponed his visit to the region for this week, and did not, unlike previous senior US officials, foray into the Palestinian territories.

In the latest expression of that snub, Abbas overlapped with Pence in Jordan from Saturday evening until midday Sunday, when the Palestinian leader flew to Brussels for a meeting with European Union foreign ministers Monday. There, Abbas urged EU member states to recognize a state of Palestine in the pre-1967 lines, and to step up their involvement in mediation.