Pence to rabbi of Poway Chabad: Your faith inspired the nation 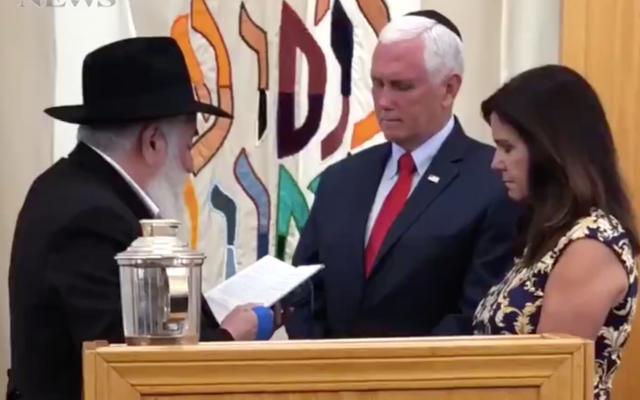 US vice president makes unannounced visit to synagogue that was scene of deadly April shooting, is blessed by congregation’s spiritual leader Yisroel Goldstein

US Vice President Mike Pence paid a surprise visit on Thursday to a San Diego area synagogue that was the scene of a deadly shooting attack three months ago, telling the congregation’s rabbi injured in the attack that he had “inspired the nation.”

“We had to come,” Pence told Rabbi Yisroel Goldstein as the two hugged upon the vice president’s entry into the synagogue

One person was killed and three others injured in the April 27 shooting at the Chabad of Poway, as the congregation celebrated the last day of Passover. Lori Gilbert Kaye, 60, was the lone victim and Rabbi Yisroel Goldstein was one of those injured by an anti-Semitic gunman.

With his hand still wrapped in a bandage after being shot and losing a finger in the attack, Goldstein gave Pence and the vice president’s wife Karen a tour of the synagogue before blessing them on the sanctuary’s stage.

“To me there was a very short moment of darkness. That darkness was pushed out of here,” the rabbi said. “God was really protecting us.”

Pence told Goldstein: “Your faith and courage are an inspiration to the nation.”

“Karen and I were honored to stop by the Chabad of Poway, the site of a terrible shooting in April,” Pence tweeted after the visit. “No one should fear in a house of worship. We will always condemn evil acts of anti-Semitism.”

The vice president was in California visiting a pair of US Navy bases in San Diego before he made his way to Poway.