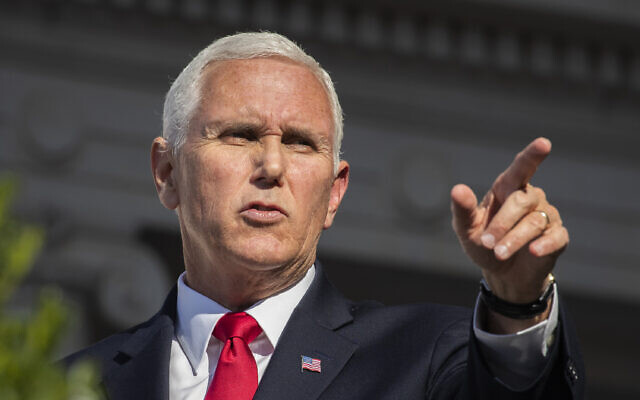 US Vice President Mike Pence on Tuesday slammed the rocket fire from Gaza, saying that it was clear that Palestinian terror groups “put violence ahead of bettering the lives of the people of Gaza.”

“The United States condemns the barrage of rockets on Israeli civilians. It’s clear Hamas & Palestinian Islamic Jihad put violence ahead of bettering the lives of the people of Gaza. America strongly affirms Israel’s right to defend itself,” Pence tweeted.

US President Donald Trump has not commented on the situation, despite addressing an event hosted by the Orthodox Jewish organization America First in New York City.

Earlier, US officials declared full American support for Israel in its conflict with the Palestinian Islamic Jihad as the Gaza-based terrorist group fired rockets at cities in the south and center after Israel killed a PIJ terror chief in a targeted strike.

“We stand with our friend & ally Israel at this critical moment & support Israel’s right to defend itself & bring an end to these barbaric attacks,” tweeted Ambassador to Israel David Friedman.

Avi Berkowitz, who will soon replace Jason Greenblatt as the Trump administration’s Mideast peace envoy, said the US “fully supports our partner & ally Israel in their fight against terrorism and the terrorist group, Palestinian Islamic Jihad (PIJ).”

“The Administration strongly condemns the barrage of rockets on Israeli civilians and continues to monitor the situation. It’s clear that the main obstacles holding Gazans back are Hamas and PIJ who put violence ahead of bettering the lives of the people of Gaza,” tweeted the longtime aide to presidential son-in-law and adviser Jared Kushner.

The Israel Defense Forces on Tuesday afternoon launched a campaign of retaliatory airstrikes against the PIJ terror group in Gaza following approximately six hours of unanswered rocket attacks on central and southern Israel from the Palestinian enclave.

More than 190 rockets have been fired into Israeli territory from the Hamas-run Gaza Strip following an early morning operation Tuesday in which Israeli Air Force jets fired precision ammunition at a building in the Shejaiya area of Gaza City where PIJ senior terror chief Baha Abu al-Ata was located, killing him and his wife.

Dozens of rockets were intercepted by the Iron Dome missile defense system, the army said.

Jordan’s foreign ministry condemned the strike on Tuesday evening. In a statement, Daifallah al-Fayez, a spokesman for the Jordanian foreign ministry, blamed Israel for the ensuing escalation in violence.

He said the fighting “will only increase tension and violence, deepen the environment of despair and promote extremist agendas in the region.”

He called for Israel and the Palestinians to return to peace negotiations, saying that talks, along with an end to the Israeli-Egyptian blockade on the territory, could bring a solution to Gaza’s woes. Israel says the blockade on the enclave is necessary to prevent the terror groups there from obtaining military equipment.

The officials said Egypt’s general intelligence agency has stepped up communications and has “opened channels” with the US and the European Union. The officials spoke on condition of anonymity because they were not authorized to brief the media.

Egypt often acts as a mediator between Israel and Gaza terrorist organizations, and brokered a ceasefire deal in May.

The EU earlier on Tuesday condemned the rocket fire.

“The firing of rockets on civilian populations is totally unacceptable and must immediately stop,” the European bloc said. “A rapid and complete deescalation is now necessary to safeguard the lives and security of Palestinian and Israeli civilians.”